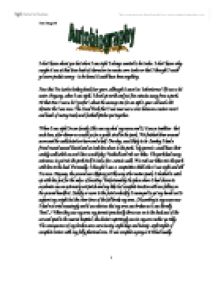 When I was eight I always wanted to be twelve

I don't know about you but when I was eight I always wanted to be twelve. I don't know why; maybe it was at that time loads of characters in movies were twelve or that I thought I could get more pocket money - to be honest it could have been anything. Now that I'm twelve looking back four years, although it wasn't as "adventurous" life was a lot easier. Anyway, when I was eight, I lived up north and just five minutes away from a park. At that time I was a lot "goofier", about the average size for an eight-year-old and a bit skinnier the I am now. The Local Park that I was near was a cross between a nature resort and loads of racing tracks and football pitches put together. ...read more.

Anyway, the ground was slippery just like any other nature park; I decided to catch up with him just for the sake e of boosting. Unfortunately the place where I had chosen to accelerate was an extremely wet patch and my bike lost complete traction with me falling on the ground headfirst. Luckily or more to the point unluckily I managed to get my hands out to support my weight but the sheer force of the fall broke my arm. (According to my mum now I had not cried amazingly and it was obvious thst my arm was broken as it was literally "bent".) When they saw my arm my parents practically threw me on to the back seat of the car and sped to the nearest hospital ; the doctors suprisingly saw to my arm rather quickly. ...read more.

The climbing frame was diagonal with it highest point reaching about two and a half metres and with my luck I fell of at the highest point braking my left arm again at exactly the same point. Talk about da ja vu! When I had arrived at the hospital I was greeted by a nurse saying "not you again". Although it was not visibly possible to see that my arm was broken it was obvious to doctors. This meant more five-week s of pure torture with every second of them burning with itchiness. From then on, I had promised myself never to be such an idiot again and let my arm support all my weight when I fell. From one's own viewpoint I thought I escaped quite a few casualties by following this method especially when I half rolled/half fell ten metres on the Great Wall. ?? ?? ?? ?? Tian Tang, 8E 1 1 ...read more.