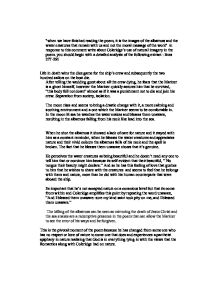 &quot;when we have finished reading the poem, it is the images of the albatross and the water creatures that remain with us and not the moral message of the work&quot; in response to this comment write about Coleridge(TM)s use of natural imagery in the po

"when we have finished reading the poem, it is the images of the albatross and the water creatures that remain with us and not the moral message of the work" in response to this comment write about Coleridge's use of natural imagery in the poem. you should begin with a detailed analysis of the following extract : lines 277-291 Life in death wins the dice game for the ship's crew and subsequently the two hundred sailors on the boat die. After telling the wedding guest about all the crew dying, he fears that the Mariner is a ghost himself, however the Mariner quickly assures him that he survived, "this body fell not down" almost as if it was a punishment not to die and join his crew. Separation from society, isolation. The moon rises and seems to bring a drastic change with it, a more calming and soothing environment and a one which the Mariner seems to be comfortable in. ...read more.

nature to some one that does and experiences a pantheist epiphany in nature realising that God is in everything tying in with the views that the Romantics along with Coleridge had on nature. As The Mariner shot the Albatross under the light of the moon which separated himself from God, in this extract the Albatross finally falls into the sea, also under the light of the moon and nature has reasserted itself. Coleridge brings a feeling of relief to the spell being broken in lines two hundred and ninty and two hundred and ninety one by describing the Albatross as falling "like lead into the sea", as if it was some sort of heavy anchor that has fallen which emphasises the Mariner's burden which he has been rid of. Unlike Wordsworth, Coleridge did not view nature as a moral guide or a source of happiness and consolation; his contemplation of nature was always accompanied by awareness of the presence of the ideal in the real. ...read more.

The disturbing image of death and a mysterious woman gambling for the crew's lives on a ghost ship that was likened to a rib cage is much harder to forget than four lines that talk about God's love. It seems as though description of the moral message isn't given the same the importance that the Albatross and water creatures are as the Albatross is described as following the ship for a long amount of time and bringing a strange mist with it, so before even the event of its death is mentioned there has been an ongoing build up of the Albatross in the readers mind and the thought that something is going to happen. The events of the poem have a life of their own which is superior to the preachers moral at the end which is somewhat clich�d and the imagery used to convey the message becomes distracting therefore having the power linger in the readers mind more than the moral message itself. ...read more.