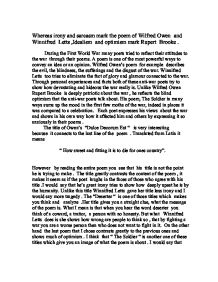 Whereas irony and sarcasm mark the poem of Wilfred Owen and Winnifred Letts ,Idealism and optimism mark Rupert Brooke .

Whereas irony and sarcasm mark the poem of Wilfred Owen and Winnifred Letts ,Idealism and optimism mark Rupert Brooke . During the First World War many poets tried to reflect their attitudes to the war through their poems. A poem is one of the most powerful ways to convey an idea or an opinion. Wilfred Owen's poem for example describes the evil, the blindness, the sufferings and the disgust of the war. Winnifred Letts too tries to eliminate the fact of glory and glamour connected to the war. Through personal experiences and facts both of these anti-war poets try to show how devastating and hideous the war really is. Unlike Wilfred Owen Rupert Brooke is deeply patriotic about the war , he reflects the blind optimism that the anti-war poets talk about. His poem, The Soldier in many ways sums up the mood in the first few moths of the war, indeed in places it was compared to a celebration. Each poet expresses his views about the war and shows in his own way how it affected him and others by expressing it so anxiously in their poems . The title of Owen's "Dulce Decorum Est " is very interesting because it connects to the last line of the poem . Translated from Latin it means " How sweet and fitting it is to die for ones country". ...read more.

poem even more dramatic because she talks about a poor fellow who could not accept the fact of him fighting and killing other men. Look at this quotation : "An English bullet in his heart An English bullet in his heart " The poet states how dramatic can war be. By using repetition the poet makes the reader think about the sentence more carefully and pay attention more to its meaning. Hoe ironic can it be that a soldier goes to fight for his country and his own country-men shoot him. Winnifred Letts also personifies fear and death and makes them two alive characters .She describes Fear and Death as the symptoms of war , and asks you the question , What is so great in it? However Rupert Brooke answers that question , all through his poem you can see signs of patriotism and reasons for the likes of the war .He and Winnifred Lettes have a different image of God they contrast a lot because Rupert Brooke thinks that you will go to heaven if you defend your country .Therefore in his mind God tells us to fight for our country and die fort it. Winnifred Letts on the contrary says that God has created us for a different purpose rather then fighting till death. ...read more.

Concepts such as those that were offered by Rupert Brooke were very sweet and honourable but they seemed more like lies. To die for one's country is very patriotic but apart from saying it poets like Brooke were not prepared for anything else. I would say it is the blind glory that Wilfred Owen talks about. You see a moving sense of poet's deep love for England and its people, positive attitude toward the war . Unfortunately it can not be compared to reality and even Rupert Brooke's great sense of optimism does not make this lie true. However Winnifrd Letts and Wilfred Owen poems show the true image of the war and what the soldiers went through. Wilfred Owen was not concerned so much about the poetry as he wrote: "I am not concerned with poetry. My subject is war, and the pity of war" This quotation shows exactly what the poets Letts and Owen were trying to reflect in their poems. Rupert Brooke's sonnet sums up admirably the mood of the optimistic patriotisms but hides away the obscenity , the death and the blindness of the war. I admire both "The Deserter" and "Dulce Decorum Est" for the direct truth and the poet's open-minded opinions .In the conclusion I disagree with the careless optimism of Rupert Brooke and support Owens and Letts ironic ideas about the war. Written by andrei P. ...read more.