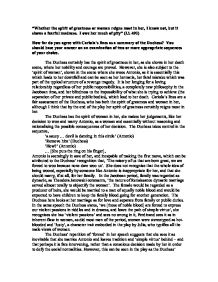 &quot;Whether the spirit of greatness or woman reigns most in her, I know not, but it shows a fearful madness. I owe her much of pity&quot; (I.i. 492)How far do you agree with Cariola's lines as a summary of the Duchess?

"Whether the spirit of greatness or woman reigns most in her, I know not, but it shows a fearful madness. I owe her much of pity" (I.i. 492) How far do you agree with Cariola's lines as a summary of the Duchess? You should base your answer on an examination of two or more appropriate sequences of your choice. The Duchess certainly has the spirit of greatness in her, as she shows in her death scene, where her nobility and courage are proved. However, she is also subject to the 'spirit of woman', shown in the scene where she woos Antonio, as it is essentially this which leads to her downfall and can be seen as her hermatia, her fatal mistake which was part of the typical structure of a revenge tragedy. It is her longing for a loving relationship regardless of her public responsibilities, a completely new philosophy in the Jacobean time, and her blindness to the impossibility of what she is trying to achieve (the separation of her private and public bodies), which lead to her death. Cariola's lines are a fair assessment of the Duchess, who has both the spirit of greatness and woman in her, although I think that by the end of the play her spirit of greatness certainly reigns most in her. ...read more.

reasoning as men, (a contrast can be drawn between the Duchess, a female tragic hero, who spends little time in reflection of her actions, and male tragic heroes of the Sixteenth Century such as Hamlet and Macbeth who think deeply about themselves and constantly rationalise and reason about their actions). Another of the Duchess' perhaps 'female' flaws, is her vulnerability to the misjudgement of people, such as her dismissal of her brothers' potential cruelty and her mislead trust for Bosola in Act III Scene II, where she na�vely reveals that Antonio is her husband. Bosola completely over-flatters Antonio to the Duchess, 'He was an excellent courtier', 'His breast was filled with perfection', yet she is deceived by his false charm and exposes Antonio, 'This good one you speak of is my husband'. This can also be interpreted as the Duchess' hermatia, rather than her earlier decision to marry a man of unworthy parentage; it is a fatal mistake (although more in the short term) and more directly leads to her death. It is an error seemingly showing the spirit of woman reigning most in her, and it seems it is not until after these two enormous misjudgements that her spirit of greatness actually shines through. ...read more.

The difference between the Duchess and almost all the other characters can be seen in Webster's use of animal imagery. While characters like Julia and the Cardinal are likened to hawks and toads, the 'flatter'ing sychophants' to insects and Ferdinand to a spider with a 'foul black cobweb', the Duchess is, throughout the play, described as small birds, specifically a lark, nightingale, and robin redbreast, 'Didst thou ever see a lark in a cage'. This affiliates the Duchess with the more beautiful and good side of nature rather than the other characters. This again emphasises the idea of the Duchess' as a great and noble character, who is trapped among these nasty corrupt characters. The Duchess does have the spirit of woman in her, essentially shown by her longing for safety and love and her misjudged fatal mistakes in the first half of the play, which I think are due to her feminine weaknesses and underestimations of the inhumane cruelty of her brothers, and society. However, following her hermatia, she seems to become wiser, and perhaps realises the impossibility of her desire to have a separate, private family unit away from her public body as the sovereign of Malfi. Her nobility in death fully exposes her 'spirit of greatness' and proves that it reigns most in her. ...read more.