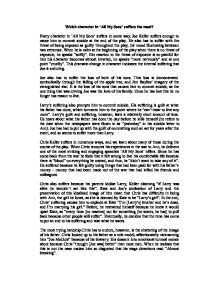 Which character in All My Sons(TM) suffers the most?

Which character in 'All My Sons' suffers the most? Every character in 'All My Sons' suffers in some way. Joe Keller suffers enough to cause him to commit suicide at the end of the play. He also has to suffer with the threat of being exposed as guilty throughout the play, his mood fluctuating between two extremes. When he is calm at the beginning of the play when there is no threat of exposure, he speaks "softly". His reaction to the threat of exposure is so painful for him his character becomes almost inverted, he speaks "more nervously" and at one point "cruelly". This dramatic change in character indicates the internal suffering that Joe is enduring. Joe also has to suffer the loss of both of his sons. This loss is demonstrated symbolically through the falling of the apple tree, and Jim Bayliss' imagery of the extinguished star. It is the loss of his sons that causes him to commit suicide, as the one thing that was driving Joe was the love of his family. ...read more.

He suffered because he felt guilty using things that had been paid for with his father's money - money that had been made out of the war that had killed his friends and colleagues. Chris also suffers because his parents idolise Larry, Keller claiming "if Larry was alive he wouldn't act like this". Kate and Joe's idolisation of Larry and the preservation of this idealised image of him mean that Chris has difficulty in being with Ann, the girl he loves, as she is deemed by Kate to be "Larry's girl". In the end, Chris' suffering causes him to explode at Kate "I'm [Larry's] brother and he's dead, and I'm marrying his girl." Before, he restrained himself because he knew it would upset Kate, as "every time [he reaches] out for something [he wants, he has] to pull back because other people will suffer". Eventually, he decides that the time has come to put an end to his suffering and take what he wants. The most trying hardship Chris has to endure, however, is the shattering of the image of his father. ...read more.

The psychological suffering that he has to endure means that he becomes nervous "towards the end of the day". The war also caused him to give up Lydia, the girl he loved, and still obviously has feelings for. The audience feel sympathy for George because it is apparent that he has suffered since the war as well. He decides to wear his father's hat because he thinks he should "look like a lawyer" even when he is unhappy in his job. Tensions are high when he arrives at the Kellers' house, and his nervousness, indicated by the way in which he frequently interrupts other characters, reveals his internal suffering. George tells Ann that she cannot marry Chris because he could not bear a union between the two families to be formed, after all the Kellers have made him suffer. In conclusion, it is my personal opinion that Chris suffers the most out of all of the characters. Not only has he suffered emotionally since the war, but also feels that he must suffer in order to make other people happy. When he finally thinks he can have what he wants, he has to deal with his father's suicide on his conscience. ...read more.