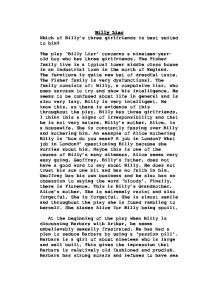 Which of Billy&amp;#146;s three girlfriends is best suited to him?

Billy Liar Which of Billy's three girlfriends is best suited to him? The play 'Billy Liar' concerns a nineteen-year-old boy who has three girlfriends. The Fisher family live in a typical lower middle class house in an industrial town in the north of England. The furniture is quite new but of dreadful taste. The Fisher family is very dysfunctional. The family consists of: Billy, a compulsive liar, who uses sarcasm to try and show his intelligence. He seems to be confused about life in general and is also very lazy. Billy is very intelligent. We know this, as there is evidence of this throughout the play. Billy has three girlfriends, I think this a signs of irresponsibility and that he is not very mature. Billy's mother, Alice, is a housewife. She is constantly fussing over Billy and mothering him. An example of Alice mothering Billy is 'how do you mean? A job in London? What job in London?' questioning Billy because she worries about him. Maybe this is one of the causes of Billy's many dilemmas. Alice seems very easy going. Geoffrey, Billy's father, does not have a good word to say about Billy. He does not trust his son one bit and has no faith in him. Geoffrey has his own business and he also has an obsession to saying the word 'bloody'. Finally, there is Florence. This is Billy's Grandmother, Alice's mother. She is extremely racist and also forgetful. She is forgetful. ...read more.

As soon as she enters the garden, she instantly insults Billy, saying to him 'look what's crawled out of the cheese'. This gives the impression that they do not really have any affection towards each other. When Billy tells her one of his extravagant lies Rita is not as gullible as Barbara. Billy and Rita do not have mutual respect in their relationship. You can tell this in their language and tone of voice. Despite all the negative points in their relationship, there is definite sexual chemistry and physical attraction. I know this because Billy attempts to quieten down Rita by kissing her passionately and, sure enough, Rita responds to this by kissing him back. Yet Rita threatens Billy by saying that her father is not happy that she has not got her ring back. I think she is trying to blackmail Billy here. Rita eventually leaves extremely angry and without a ring. She has left Billy in a predicament because has threatened that her father will come and sort him out! Later that day Rita returns to the Fisher house. She is now furious. She does not knock before going in. This is extremely rude. Rita is not intimidated by older people we can see this in the manner in which she talks to Billy's mother. While talking to people Rita frequently mocs the way they talk. She comes up with some amazing insults and dishes them out, one being 'squint eyed, bow legged, spotty snotty nosed streak of nothing'. She directs this insult Barbara. She does not think much of Barbara at all. ...read more.

Billy loves talking to Liz. We can see this in the length of his of his speeches. At the end of act three, we can see that Liz is more optimistic than Billy. She makes her mind up about going London. She is sure but Billy is unsure and to some extent pessimistic about going. Liz just makes her decisions on impulse. Liz and Billy get along really well and enjoy each other's company. They have interesting conversations in which they are both fully involved. It seems as if they are sole mates. But maybe they would be suited better as just good friends. I do not think any one of the three girls is really suitable for Billy. Billy has things in common with each of the girls. Barbara and Billy both fantasize, Billy and Rita have a lot of sexual chemistry between them while Billy and Liz can talk to each other very well. But Billy has big relationship issues. He cannot commit in a relationship; he shows this in the way that he decides not to go to London at the end of the play. He cannot make decisions; he shows this numerous times throughout the play and one of his main goals should be to stop lying! I think Billy could learn to love each of these girls. But I am unsure he would be able to live with them or get married. Billy cannot keep still; he cannot stick to one girl; he cannot make a sensible decision. Billy is highly intelligent but his inability to make decisions stops him getting anywhere in life. Grade = A ?? ?? ?? ?? ...read more.