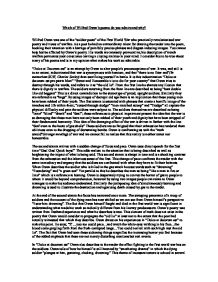 Which of Wilfred Owen's poems do you admire and why?

Which of Wilfred Owen's poems do you admire and why? Wilfred Owen was one of the "soldier poets" of the First World War who practically revolutionised war poetry and views of warfare. As a poet he had an extraordinary talent for drawing the reader into the poem, hooking their attention with a barrage of painfully precise phrases and disgust-inducing images. You cannot help but be affected by Owen's poetry. His words are intensely provocative; his description of trench warfare permeates your conscience leaving a cloying malaise in your mind. I consider this to be true about many of his poems and is in my opinion what makes his work so admirable. "Dulce et Decorum est" is an attempt by Owen to alter people's preconceptions of war. It was, and still is to an extent, indoctrinated that war is synonymous with heroism, and that "there is no fitter end"(In memoriam SCW, Charles Sorley) than sacrificing yourself in battle. It is this indoctrination "Dulce et decorum est pro patria Mori" "Sweet and Honourable it is to die for your country" that Owen tries to destroy through his words, and refers to it as "the old lie". From the first line he shatters any illusion that there is dignity in warfare. The soldiers returning from the front line are described as being "bent double like old beggars" This is a direct contradiction to the stereotype of proud, upright soldiers. ...read more.

Similarly the juxtaposing idea of simultaneously burning and drowning is used to illustrate the destruction and agonising death caused by gas to the reader. At the end of the second stanza the focus has narrowed once more. The sweeping panorama of a troop of soldiers and the account of the dying man has now shifted so we can see from Owen himself's perspective "I saw him drowning". The fact that Owen himself fought and died in the first world war is significant in understanding what made his work so radically different from his literary predecessors. Owen's poetry was written from firsthand experience and what he describes is true. This element of truth does not exist in the poetry that Owen would consider to propagate the "old lie" at least not to the extent that the poet had actually witnessed that which they describe. Owen draws on his experiences in "Dulce et decorum est" to make his point. He says; "If ...you too could pace...and watch the white eyes writhing in his face...the blood come gargling forth from the froth-corrupted lungs...You could not tell with such high zest the old lie". The fact that Owen had seen these sickening things magnifies the increasing horror you feel because of the added emphasis that these are not merely disturbing creations but real events. ...read more.

"The pallor of girls brows shall be their pall" tells of the effect these "multitudinous murders"(mental cases) will have on those people remaining. Owens words provoke in our mind the grief that the mothers, wives and girlfriends are obliged to endure, we cannot fail to realise this lamentable loss of loved ones and empathise with those left "calling for them from sad shires". This is indeed tribute to the "Doomed youth" and their tragic fate. "Anthem for Doomed youth" ends tenderly and respectfully with an underlying manifestation of bidding goodbye not only to the dead soldiers but to this condemned generation. The "holy glimmers of goodbyes" give you as a reader a haunting impression of the hopelessness. Owen's language is highly evocative towards the end of the third stanza, he is subtly attacking the establishment as is the nature of much of his work. With the last line "And each slow dusk a drawing down of blinds" the ideas of life ending, lament and mourning are firmly embedded. The reader is then left with the torturous question lingering on their conscience; Supposedly we are a civilised society so why do we let our men "die as cattle" under the thin veneer of patriotism and dignity? This thought provoking quality, prevalent in all Owen's poetry, is why I consider it so estimable. A poem that pervaded my mind in particular was "Strange Meeting". Once again this poem is demonstrative of Owen's zeal to inform us of the "truth untold". ...read more.