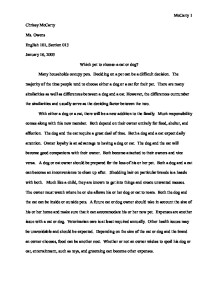 Which pet to choose-a cat or dog?

McCarty 1 Chrissy McCarty Ms. Owens English 101, Section 013 January 16, 2003 Which pet to choose-a cat or dog? Many households occupy pets. Deciding on a pet can be a difficult decision. The majority of the time people tend to choose either a dog or a cat for their pet. There are many similarities as well as differences between a dog and a cat. However, the differences outnumber the similarities and usually serve as the deciding factor between the two. With either a dog or a cat, there will be a new addition to the family. Much responsibility comes along with this new member. Both depend on their owner entirely for food, shelter, and affection. The dog and the cat require a great deal of time. Both a dog and a cat expect daily attention. Owner loyalty is an advantage to having a dog or cat. The dog and the cat will become good companions with their owner. ...read more.

Dogs and cats also vary. The cat feels as though it is a god. It should be lavishly taken care of. Its owner should provide food, water, and the other necessities in life without any hesitation. The cat feels it deserves the best in life and it doesn't owe its owner anything. Once the cat is satisfied, it does not want to be bothered. The cat will venture off to find some comfortable place to nap for hours. The dog is the complete opposite. It feels the owner is a god. The dog is so thankful to have food and water. The dog requires the bare essentials to life. It is continuously showing the owner its appreciation with tons of "kisses." The dog makes friends easily whereas the cat is rarely sociable. The dog acknowledges any breathing object with a wagging tail. The cat holds its head high with its nose in the air like some royalty. The dog is also much more forgiving than the cat. ...read more.

A dog is very genuine. It takes one day at a time and actually enjoys it. With its smile-like face, a dog seem to relish in the simple pleasures of life that humans overlook. A dog wants to play endlessly. A dog will retrieve a stick all day. A dog is never content with the amount of time that itsowner gives them. A cat seldom wants to play and is satisfied with a minute of batting at a dangling fake mouse. A dog is also a great exercise partner, as long as its owner is willing to follow behind a dashing dog. Once the differences and similarities become apparent to a future dog or cat owner, the decision is easy. One should choose a pet that is compatible with his or her lifestyle. A dog and a cat are both great additions to any family. Taking a life into one's hands is a important commitment and should not be taken lightly. After the decision between a cat and dog is made, it is easy to fall in love with the new pet. ...read more.