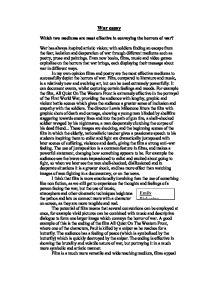 Which two mediums are most effective in conveying the horrors of war?

War essay Which two mediums are most effective in conveying the horrors of war? War has always inspired artistic vision; with soldiers finding an escape from the fear, isolation and desperation of war through different mediums such as poetry, prose and paintings. Even now books, films, music and video games capitalise on the horrors that war brings, each displaying their message about war in different ways. In my own opinion films and poetry are the most effective mediums to successfully depict the horrors of war. Film, compared to literature and music, is a relatively new and evolving art, but can be used extremely powerfully. It can document events, whilst capturing certain feelings and moods. For example the film, All Quiet On The Western Front is extremely effective in the portrayal of the First World War, providing the audience with lengthy, graphic and violent battle scenes which gives the audience a greater sense of inclusion and empathy with the soldiers. The director Lewis Milestone litters the film with graphic shots of death and carnage, showing a young man blinded by shellfire staggering towards enemy lines and into the path of gun fire, a shell-shocked soldier ravaged by his nightmares, a man desperately clutching the corpse of his dead friend... ...read more.

The potential of film means that several conventions can be employed at once, for example vivid pictures can be combined with music and descriptive dialogue to form one larger image which conveys the horror of war. A good example of this is the ending of the film All Quiet On The Western Front, where one of the characters, Paul is killed by a sniper as he reaches for a butterfly. The audience has a feeling of peace (which is symbolised by the butterfly) which is quickly destroyed by the sniper. The ending is effective in showing the brutality and volatile nature of war, but portraying it in a much more symbolic and artistic manner. Film is a much more versatile and wide reaching medium, films appeal to a larger audience, and people are more likely to see a film than read a book about the war. Poetry is another effective method that expresses the reality of war, many of the most famous poems about life as a soldier were written by soldiers themselves, so they reflect an accurate image of what it was really like. ...read more.

of a soldier, the explosive nature of a battlefield or can provide an outlet for the poet to pour his feelings into. Poems are more expressive than prose but usually more concise, their message about war is more dramatic, more graphic and more powerful. The First World War inspired works in many different mediums, but poetry seemed to capture the essence of the war more than any other art form, making names such as Owen and Sassoon famous literary figures and their work synonymous with the conflict. Poetry and film is linked by artistic endeavour - both try and succeed in capturing the horrors of war. Films such as Saving Private Ryan and Apocalypse Now effectively portray the brutality of conflict and show the audience disturbing, grim pictures of death and injury, whereas poems, the hundreds written during the world wars and more recent conflicts, offer a accurate but horrific insight into violent scenes or the shell-shocked minds of poets, often written without experience, without retrospect at the time the war was happening. In conclusion poetry and films are most effective in conveying the horrors of war. ?? ?? ?? ?? ...read more.