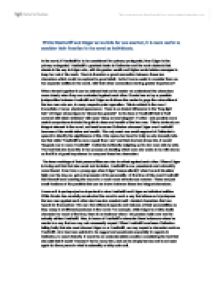 While Heathcliff and Edgar act as foils for one another, it is more useful to consider their function in the novel as individuals. Discuss

While Heathcliff and Edgar act as foils for one another, it is more useful to consider their function in the novel as individuals. In the novel, if Heathcliff is to be considered the primary protagonist, then Edgar is the primary antagonist. Heathcliff's greatest desire is Catherine and the main obstacle that stands in his way is Edgar who, with his greater wealth and higher social status manages to keep her out of his reach. There is therefore a great connection between these two characters which could be explored in great detail; but is it more useful to consider them as two separate entities in the novel, with their other connections having greater importance? When viewed together it can be claimed that as the reader we understand the characters more clearly when they are contrasted against each other. ...read more.

She opens her heart to Nelly as she honestly tells her that while "Heathcliff is more myself than I am" and that she truly loves him, it would "degrade me to marry Heathcliff". Catherine is literally weighing up the two men side by side. The fact that she does this in her process of deciding which man she wants to be with shows us that it is of great importance to compare these two characters. The inner workings of their personalities can also be offset against each other. Where Edgar is loving and kind but also weak and feminine, Heathcliff is raw, passionate and ostensibly more flawed. Even from a young age when Edgar "weeps silently" when he and his sister fight over the dog we get an impression of his personality. ...read more.

When Heathcliff overhears Catherine telling Nelly that she must choose Edgar over Heathcliff, we may expect a character such as Heathcliff, who has been painted to be rugged and passionate especially in regards to Catherine, to react violently. It would be an understandable reaction considering the fact that she said that it would "demean" her to marry him, and yet he simply leaves and is not seen again for three years in what is ostensibly a fairly calm exit. In conclusion I believe that the only way to gain a thorough understanding of these characters is to view them both as individuals and as a contrasting pair. The insight gained from observing their actions within themselves provides a foundation of knowledge which can then be built on by considering their value and consequence in relation to each other's actions. ...read more.