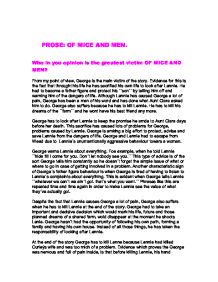 Who in you opinion is the greatest victim Of mice and men?

PROSE: OF MICE AND MEN. Who in you opinion is the greatest victim OF MICE AND MEN? From my point of view, George is the main victim of the story. Evidence for this is the fact that throught his life he has sacrified his own life to look after Lennie. He had to become a father figure and protect his ��son�� by telling him off and warning him of the dangers of life. Although Lennie has caused George a lot of pain, George has been a man of his word and has done what Aunt Clara asked him to do. George also suffers because he has to kill Lennie. He has to kill his dreams of the ��farm�� and he wont have his best friend any more. George has to look after Lennie to keep the promise he amde to Aunt Clara days before her death. This sacrifice has caused lots of problems for George, problems caused by Lennie. George is amking a big effort to protect, advise and save Lennie from the dangers of life. ...read more.

George hasn�t had the opportunity of following his own path, forming a family and having his own house. Instead of all those things, he has taken the responsability of looking after Lennie. At the end of the story George has to kill Lenne because Lennie had killed Curle�s wife and was too mich of a problem. Evidence which proves the George was nervous and full of pain inside, is that before killing Lennie, his hand trembled, which was sign of panic and terror. Mnutes later, Slim, Carlson and Curley appeared. While George was still in a state of shock, the others, Curley and Carlson were talking amongst themselves about this death. The only person who could really understand George�s feelings, was Slim. who tried to console George. Slim was the only one who really could see George�s sadness by the look on his face. Slim�s reaction is evidence that George was upset. In order to give George some frindly support, he told him ��never you mind.�� At least someone could attempt to feel what only George could feel at that moment. ...read more.

He will never be able to do things by himself without making a mess of it. He isn�t self-sufficient. Lennie hasn�t got the freedom all humans want and demand to have. Lennie can�t do what he wants, nor take his own and personal decisions. This is a great problem to deal with. Lennie can be considered as a victim because although he acts in a babyish way, all what he does wrong is dine ununtentionally because he isn�t conscious of what is wrong or not and what can cause problems. Much of this book is about outsiders who defend their own interests in this society. However, I stongly believe that George appears to be the greatest victim of this novel due to his loyalty and companionship with Lennie. George is the one who has sacrifeied all that he aimed for in life, without receiving a reward, furthermore he has been ��forced �� by the circumstances to shoot Lennie, the person who has been with him at all moments of his life. The strong and deep connection between George and Lennie has suddenly ended with Lennie�s death, tragedy which will take George time to recover from. ...read more.