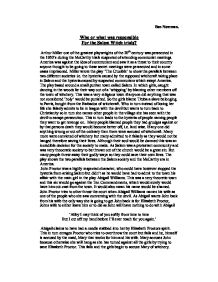 Who or what was responsible For the Salem Witch trials?

Ben Newman. Who or what was responsible For the Salem Witch trials? Arthur Miller one of the greatest playwrights of the 20th century was persecuted in the 1950's during the McCarthy trials suspected of attending communist meetings. America was against the idea of communism and saw it as a threat to their country anyone thought to be going to these secret meetings were persecuted and in some cases imprisoned. Miller wrote the play 'The Crucible' to show the parallels between two different societies i.e. the hysteria caused by the supposed witchcraft taking place in Salem and the hysteria caused by suspected communism which swept America. The play based around a small puritan town called Salem. In which girls, caught dancing in the woods lie their way out of a 'whipping' by blaming other members off the town of witchery. This was a very religious town if anyone did anything that was not considered 'holy' would be punished. So the girls blame Tituba a slave belonging to Parris, bought from the Barbados of witchcraft. Who in turn instead of losing her life she falsely admits to be in league with the devil but wants to turn back to Christianity so in turn she names other people in the village she has seen with the devil to escape persecution. ...read more.

Danforth would not stop the executions as this would have made him an executioner of innocent people and his soul would have also been damned. Danforth would have also lost his position in the court. This shows that Danforth was also looking after his best interests also by continuing with the trials, also another major cause for the hysteria that took place. Hathorne along with Danforth was also a member of the court he too could have stopped the hangings, but he also would not lose his place and anger the town by announcing that the court was to be abolished as to many people were being hung. This would anger people as people as this would void the whole court and make the girls liars, which they were. 'That girl has always struck me false!' Abigail was a very manipulative and forceful character, who had a lot to with the fear and escalation of witches in Salem. Abigail came to have so much power that she even accuses Danforth of is holiness and manages to fool the whole town with her and the other girls antics in the court. ...read more.

This also contributed to the Witch-hunt and hysteria, as people would accuse anyone for doing anything. I feel that many different people are responsible for the deaths caused by the Salem witch trials. John Proctor could have stopped the court by announcing his affair with Abigail Williams and telling Danforth and by telling the court that Abigail had told him they were just dancing for sport and nothing more. 'Oh posh! We were dancin' in the woods last night, and my uncle leaped in on us. She took fright is all.' Abigail could have never lied about Tituba and never called witchery, she could have just taken her punishment and accepted it instead of the many hangings that took place. Elizabeth proctor could have also told the courts what John had said to her about Abigail. Hathorne and Danforth could also have stopped the hangings but refused to as they would have had to admit to being wrong and condemning innocent people to hang. Overall I think the whole of Salem was very fickle and would not say no to the hangings for the fear of themselves being named. I feel Arthur Miller shows in great alikeness the parallels between the Salem society and the McCarthy era. ...read more.