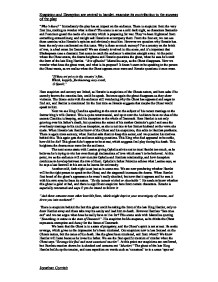 "Who's there?" Immediately the play has an impact on the audience. There is suspicion from the very first line, making us wonder what is there? The scene is set as a cold dark night, as characters Bernardo and Francisco guard the castle of a country which is preparing for war. They've been frightened from something extraordinary, and tonight ask Horatio to accompany them. From the first act, we can see these sentries value Horatio's opinion and obviously trust him. However we question why Horatio has been the only one confronted on this issue. Why is there so much secrecy? For a country on the brink of war, is a bad omen for Denmark? We are already involved in this scene, and it's important that Shakespeare uses a dramatic first scene to catch the audience's attention straight away. At the point where the Ghost enters, the drama heightens and Horatio questions the ghost, when he sees he's took the form of the late King Hamlet. "It is offended" Marcellus says, as the Ghost disappears. Now we wonder what does the ghost want, and what is its purpose? It doesn't seem to be speaking to the person the Ghost wants, as we realise when the Ghost appears once more and Horatio questions it once more. "If thou art privy to thy country's fate, Which, happily, foreknowing may avoid, O Speak;" Here suspicion and secrecy are linked, as Horatio is suspicious of the Ghosts nature, and here asks if he secretly knows the counties fate, could he speak. But once again the ghost disappears as they show violence. The Scene ends with the audience still wondering why the Ghost has appeared and eager to find out, and Hamlet is mentioned for the first time as Horatio suggests that maybe the Ghost would speak to him. Next we see King Claudius speaking to the court on the subject of his recent marriage to the former king's wife Gertrud. ...read more.

Hamlet sees through them, and replies "It is as easy as lying". They're finding it easy to lie to a friend, and he picks up on this to the delight of the audience. And these words don't seem like they are coming from a madman. The scene ends with increased tension. Hamlet's suspicions have been confirmed, so the audience now wonder, will he finally take action? The secrecy and deception from Polonius' part we now see contributes to his death. As he plans to spy on Hamlet, he gives Gertrude some advice as they try to find reason behind his madness. "Ill silence me even here". He takes his spying role very seriously, and this quote is highly ironic, as we know Polonius isn't the character who can keep quiet. When Hamlet enters he wastes no time to question the Queen. He intends to hurt Gertrude, and show her what she's done by marrying Claudius. "Come, come, and sit you down, you shall not budge. You go not till I set you up a class Where you may see the inmost part of you" Gertrude is confused and scared, and cries out which makes Polonius draw attention to himself. "How now? A rat! Dead for a ducat, dead." Hamlet kills the 'rat' hoping that it's the King. There is significant irony behind his death. Polonius was a mean who talked a lot, and struggled to be brief and keep quiet. His deception and secrecy has played a big part towards his death, and like a rat he's drawn attention to himself by squeaking. "Is it the king?" Hamlet doesn't know who it is he's killed, and we can see he's hoping it's the King and is finally taking action. He lifts over the cover and discovers Polonius dead. At witnessing this, the Queen comments "O what a rash and bloody deed is this!" Hamlet rebukes her, saying "A bloody deed Almost as bad, good mother, As kill a king and marry with his brother." ...read more.

This is not a sign of cowardice, he acknowledges he's still deceived Hamlet, but he can make amends by allowing Hamlet to gain some honour before he dies. "The point envenom'd too! Then, venom, to thy work!" and at this he wounds the King. Laertes now accepts Hamlets earlier apology and asks forgiveness then shortly after dies. Horatio is significantly affected from the situations, as all the people he's had regard for have died. However, Hamlet doesn't want a noble honest man to die also, when Horatio questions his will to live. He cant see more death, and also he's the only one who can put the record straight and knows the full truth of all this deception. As Hamlet dies he comments on how Denmark needs someone strong and brave to lead them, just like his father. "Now cracks a noble heart. Good night, sweet prince, And flights of angels sing thee to thy rest" We trust Horatio's word, he's always honest and he was the only one Hamlet trusted. Suspicion, secrecy and deception all play a huge part in this play in different ways. The suspicion involves the audience, secrecy leads to suspense and deception has also proved it can be humorous at times. The deception contributes to the success of the play, as it affects our feelings towards the different characters. Polonius is made a mockery from deception when Hamlet has the upper hand on him, and deception also leads to his death. We feel pity towards Ophelia as her death is a result of Hamlets feigned madness and we are critical of the extent he had to go. As for Claudius, his deception leads the audience to hating him not only for the terrible deed of murdering his brother, but the skill in which he deceives and uses people. It's his skill in deception which leads to many deaths and affects Hamlet's character and makes us judge other peoples character. ?? ?? ?? ?? Suspicion and Deception are central to hamlet, examine its contribution to the success of the play Jonathan Cornish ...read more.