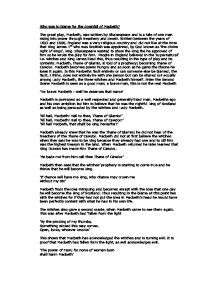 Who was to blame for the downfall of Macbeth?

Who was to blame for the downfall of Macbeth? The great play, Macbeth, was written by Shakespeare and is a tale of one man rising into power through treachery and deceit. Written between the years of 1603 and 1606, England was a very religious country and did not like at the time that King James 1st who was Scottish was appointed, by God known as 'the divine right of kings', king. Shakespeare wanted to show the king the he approved of him so he wrote the play for him. People in England believed in the 'supernatural' i.e. witches and King James liked this, thus resulting in the type of play and its contents. Macbeth, Thane of Glamis, is told of a prophecy; becoming Thane of Cawdor. Macbeth becomes power hungry and as soon as he gains the throne he loses it again. Is this Macbeths fault entirely or can someone else be blamed, the fault, I think, does not entirely lie with one person but can be shared out equally among Lady Macbeth, the three witches and Macbeth himself. Enter the Second Scene Macbeth is seen as a good man; a brave man, this is not the real Macbeth 'For brave Macbeth - well he deserves that name' Macbeth is portrayed as a well respected and generally liked man. ...read more.

that she is a very persuasive character and therefore played a part in Macbeths downfall for it was her who helped him kill the king; showing she had some power over him. Macbeth did not want to kill the king, showing that he was doubtful, because Duncan has been a good king to him. The blame on Lady Macbeth can only go so far because all she has done is pushed him towards the throne, lady Macbeth becomes wrought with guilt, even though her husband is not, she then commits suicide to ry and redeem herself. The other side of the blame can only be placed on Macbeths shoulders for it was he who murdered king Duncan, he who killed his best friend Banquo and it was he who ordered Mucduffs Family to be killed. Even though his wife persuaded him, even though it was the witches who started the whole thing Macbeth committed the murder. 'We have scorched the snake, not killed it' At this point Macbeth is rising, he wants to be king and he will do anything to secure his throne, it is his ambition that brings his downfall. Macbeth wants Banquo dead for it is said that his sons will be the sons of kings 'It is concluded! ...read more.

Though the blame can be laid on the witches, and on Lady Macbeth, it is none other than Macbeth to whom the major blame can be cast. The fallen hero's ambition was the fuel to his dark deeds. If he had not aspired to become king (which would not have happened if the witches had not spoken to Macbeth) he would not have killed the king. He plotted the murder of his friends and friend's family. Macbeth was not just a murderer. He was a traitor to the country; by even thinking of killing the king, he had committed the highest treason possible, besides killing the king himself, which he also did. Yes, the witches and Lady Macbeth can be blamed for Macbeth's downfall, but Macbeth must take the majority of the blame. It is his ambition which leads to his ultimate demise. The witches and Lady Macbeth helped to 'scorch the snake' but it was none other than Macbeth himself, with the courage given to him by becoming king, and fulfilling his ambition, that 'killed the snake.' It was Macbeth's own ambition, aided by Lady Macbeth and the witches, which led to him creating his own downfall. So be warned and be wary! Beware of witches, helpful wives, and most of all, of your own ambition. . ...read more.