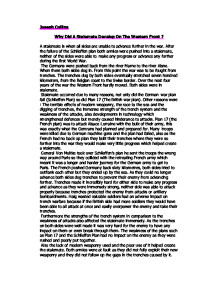 Why Did A Stalemate Develop On The Western Front ?

Joseph Collins Why Did A Stalemate Develop On The Western Front ? A stalemate is when all sides are unable to advance further in the war. After the failure of the Schlieffen plan both armies were pushed into a stalemate, neither of the sides were able to make any progress or advance any further during the first World War. The Germans were pushed back from the river Marne to the river Aisne. When there both sides dug in. From this point the war was to be fought from trenches. The trenches dug by both sides eventually stretched seven hundred kilometers, from the Belgian coast to the Swiss border. Over the next four years of the war the Western Front hardly moved. Both sides were in stalemate. Stalemate occurred due to many reasons, not only did the German war plan fail (Schlieffen Plan) so did Plan 17 (The British war plan). Other reasons were : The terrible effects of modern weaponry, the race to the sea and the digging of trenches, the immense strength ...read more.

As they could no longer advance both sides dug trenches to prevent their enemy from advancing further. Trenches made it incredibly hard for either side to make any progress and advance as they were immensely strong, neither side was able to attack properly because trenches protected the enemy from attacks or artillery bombardments. Haig wasted valuable soldiers had an adverse impact on trench warfare because if the British side had more soldiers they would have been able to all attack at once and easily overpower the enemy and take their trenches. Furthermore the strengths of the trench system in comparison to the weakness of attacks also affected the stalemate immensely. As the trenches on both sides were well made it was very hard for the enemy to have any impact on them or even break through them. The weakness of the plans such as Plan 17 and the Schlieffen Plan had no impact on the enemy as they were rushed and poorly put together. ...read more.

the telephone meant that it was hard to receive information and if they had this information they would be able to plan a counter attack. Deaths due to heavy artillery fire caused the opposition to construct more trenches, more trenches meant no advancing on the enemy also helping create the stalemate. The main cause of the stalemate was the failure of the war plans and that neither side had a back-up plan. Should either side have prepared back-up plans it would have been easier to cope with attacks from the enemy however both sides were stubborn and stuck with what had given them previous success which lead to stalemate. The strength of the trenches in comparison to the weakness of attacks made it incredibly hard for the enemy to make any significant progress on the Western Front. This greatly helped the development of the stalemate as both sides were fighting a primarily defensive war and did little offensively, and their weaponry and the lack of information receiving technology all helped significantly create the stalemate. ...read more.