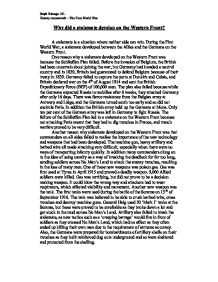 Why did a stalemate develop on the Western Front?

The failure of the Schlieffen Plan led to a stalemate on the Western Front because not attacking Paris meant that they had to dig trenches in France, and trench warfare proved to be very difficult. Another reason why stalemate developed on the Western Front was that commanders on all sides failed to realise the importance of the new technology and weapons that had been developed. The machine gun, heavy artillery and barbed wire all made attacking very difficult, especially when there were no ways of transporting infantry quickly. In addition many commanders clung on to the idea of using cavalry as a way of breaking the deadlock for far too long, sending soldiers across No Man's Land to attack the enemy trenches, resulting in the loss of many men. ...read more.

The tank was believed to be able to crush barbed wire, cross trenches and destroy machine guns. General Haig used 50 'Mark I' tanks at the Somme, but these were proved to be unreliable as they broke down a lot and got stuck in the mud across No Man's Land. Artillery also failed to break the stalemate, as new tactics such as a 'creeping barrage' would fire in front of soldiers as they crossed No Man's Land, which had no effect as they often ended up killing their own men due to the requirement of extreme accuracy. Also, the Germans were prepared for bombardments of artillery shells on their trenches as they built reinforced dug outs underground and so were sheltered and protected from the shelling. Steph Birnage 10L History coursework - The First World War ...read more.