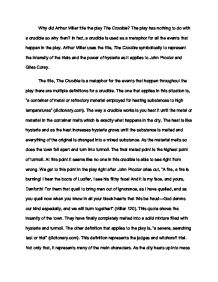 Why did Arthur Miller title the play The Crucible?

Why did Arthur Miller title the play The Crucible? The play has nothing to do with a crucible so why then? In fact, a crucible is used as a metaphor for all the events that happen in the play. Arthur Miller uses the title, The Crucible symbolically to represent the intensity of the trials and the power of hysteria as it applies to John Proctor and Giles Corey. The title, The Crucible is a metaphor for the events that happen throughout the play there are multiple definitions for a crucible. The one that applies in this situation is, "a container of metal or refractory material employed for heating substances to high temperatures" (dictionary.com). The way a crucible works is you heat it until the metal or material in the container melts which is exactly what happens in the city. The heat is like hysteria and as the heat increases hysteria grows until the substance is melted and everything of the original is changed into a mixed substance. ...read more.

I have forgot Abigail, and-!"(54). The quote shows proctor and his wife, Elizabeth fighting about his relationship with Abigail. He told Elizabeth the truth about his relationship and it has caused his relationship to heat up into an uncomfortable state for seven months before the trials have begun. For Proctor this event has already given him a trial of right and wrong. Proctor reaches the highest point in his tests as they are crucibles when he says, "You are pulling Heaven down and raising up a w***e" (120). Proctor has just said that this court is destroying heaven and raising up the children and Abigail in specifics as Saints. Proctor's life has completely melted in his crucible as he just threw away his good name and soul. He says God is dead and the town is going to h**l when they think they are doing what is right. The only person still out there that is able to see the truth is Hale and he immediately denounces the court. ...read more.

Putnam, I have here an accusation by Mr. Corey against you. He states that you coldly prompted your daughter to cry witchery upon George Jacobs that is now in jail" (96). When he accuses Putnam his heart is in the right place and when he is forced to give the name of his source he refuses to just to protect his friend. It shows that even if someone accuses someone else of false accusation it is meaningless as they are all stuck in this mass hysteria with no chance of escape. Giles ends up dying by press when they are interrogating him because he wanted to protect his family and friends, which shows that death is the only escape from it. The title, The Crucible is a metaphor that represents the power of the witch trials and the strength of the mass hysteria which applies to John Proctor and Giles Corey along with many other characters. The characters were all tested and only a few remained true and separate from the melting pot, while many others fell into the mixture. In the end the truth killed those who truly realized what was happening and hysteria destroys the town. ...read more.