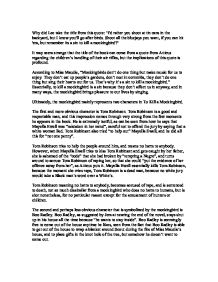 Why did Lee take the title from this quote: &quot;I'd rather you shoot at tin cans in the backyard, but I know you'll go after birds. Shoot all the bluejays you want, if you can hit 'em, but remember its a sin to kill a mockingbird?&quot;

Why did Lee take the title from this quote: "I'd rather you shoot at tin cans in the backyard, but I know you'll go after birds. Shoot all the bluejays you want, if you can hit 'em, but remember its a sin to kill a mockingbird?" It may seem strange that the title of the book can come from a quote from Atticus regarding the children's handling of their air rifles, but the implications of this quote is profound. According to Miss Maudie, "Mockingbirds don't do one thing but make music for us to enjoy. They don't eat up people's gardens, don't nest in corncribs, they don't do one thing but sing their hearts out for us. That's why it's a sin to kill a mockingbird." Essentially, to kill a mockingbird is a sin because they don't affect us in anyway, and in many ways, the mockingbird brings pleasure to our lives by singing. Ultimately, the mockingbird mainly represents two characters in To Kill a Mockingbird. The first and more obvious character is Tom Robinson. ...read more.

the fire of Miss Maudie's house, and to place gifts in the knot hole of the tree, but somehow he doesn't want to come out. Even though it is a person's personal choice as to whether he wishes to stay inside or come out, the fact that the Radley family stays in is almost seen like a sin to Maycomb: "The Radleys, welcome anywhere in town, kept to themselves, a predilection unforgivable in Maycomb." As of a result of the Radley's strange behaviour, Boo Radley becomes subject to wild rumours in the neighbourhood, which are not restricted to childish talk. According to Miss Stephanie, she "saw him looking straight through the window at her... said his head was like a skull looking at her." There was talk also that Boo Radley was responsible for animal mutilation in town, even after it was found that Crazy Addie who was the culprit. However, we know from Scout and Jem's experience Boo Radley that he was nothing of that sort. Boo Radley helped keep Scout warm on the night of the fire at Miss Maudie's. ...read more.

These two characters teach her and Jem innumerable lessons about life and prejudice. Thus, it is apt to name the book after these two characters. These two characters are punished by society for no apparent reason, but from what we know, they are innocent and good people, if not better than the other men around them. These two mockingbirds were "killed", and it was a sin to kill them. Thus, Harper Lee wishes to draw our attention to these two mockingbirds, and how killing them is a sin. Harper Lee places the mockingbird quote in two people's mouths: Miss Maudie and Atticus. Atticus tells the children not to shoot at mockingbirds, while Miss Maudie explains to the children why they shouldn't shoot at mockingbirds. The final touch of using this quote for the title of the book, is that this truth is said by these two people. It suggests to the reader that Miss Maudie and Atticus are the upholders of truth, as they are in the novel. Thus by using the Mockingbird as the title, it tells us that the central message of the novel is in the trial of Tom Robinson and Boo Radley, and that Miss Maudie and Atticus are the upholders of truth in the novel. ...read more.