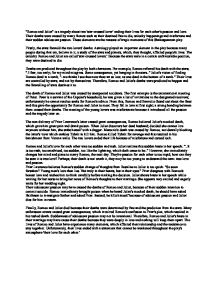 Why did Romeo and Juliet Die

"Romeo and Juliet" is a tragedy about two 'star-crossed lover' ending their lives for each other's passion and love. Their deaths were caused by many factors such as their destined fate to die, unlucky happenings and misfortune and their sudden adolescent passion. These elements are the reasons of tragic moments of this Shakespearean play. Firstly, the stars foretold the two lovers' deaths. Astrology played an important element in the play because many people during that era, believe in it, a study of the stars and planets, which, they thought, affected people's lives. The unlucky Romeo and Juliet are called 'star-crossed lovers.' Because the stars were in a certain unfavourable position, they were destined to die. Deaths are predicted throughout the play by both characters. ...read more.

They fell in love at first sight; a strong bonding between them caused their deaths. The meeting of the young lovers was misfortunate because it introduced all the passion and the tragedy later on. The non-delivery of Friar Lawrence's letter caused great consequences, Romeo believed Juliet's mocked death, which gave him great pain and drank poison. When Juliet discovers her dead husband; decided she cannot live anymore without him, she stabs herself with a dagger. Meructio's death was caused by Romeo, accidentally blocking the latter's view which enables Tybalt to kill him. Romeo killed Tybalt for revenge and this resulted in his banishment from Verona walls. The two lovers ended their life because of misfortune and cursed luck. Romeo and Juliet's love for each other was too sudden and rash. ...read more.

Romeo immediately brought poison when he heard Juliet's mocked death, he should have asked Balthasar to investigate further and asked Friar. Instead, he kills himself because of adolescent passion and Juliet dies for him in return. Finally, Romeo and Juliet died because their deaths were determined by fate and the prediction from the stars. Many unforeseen events caused great consequences, which involved Romeo's confusion to Friar's plot, which resulted in his rushed death. Suddenness of adolescent passion may not be intentional. Therefore, Romeo and Juliet's haste in their marriage may have cause their deaths because they were deeply in love and nothing will keep them apart. The lives of Romeo and Juliet have experience many elements, which affected their relationship and the resistance to stay together. Unfortunately, their lives ended with a statement that cannot be weakened throughout the play's atmosphere-'their love for each other.' ...read more.