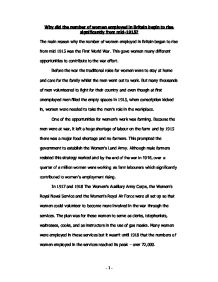 Why did the number of women employed in Britain begin to rise significantly from mid-1915?

Why did the number of women employed in Britain begin to rise significantly from mid-1915? The main reason why the number of women employed in Britain began to rise from mid 1915 was the First World War. This gave women many different opportunities to contribute to the war effort. Before the war the traditional roles for women were to stay at home and care for the family whilst the men went out to work. But many thousands of men volunteered to fight for their country and even though at first unemployed men filled the empty spaces in 1915, when conscription kicked in, women were needed to take the men's role in the workplace. One of the opportunities for women's work was farming. Because the men were at war, it left a huge shortage of labour on the farm and by 1915 there was a major food shortage and no farmers. ...read more.

The idea of a working woman being strong and heroic was promoted everywhere using posters & artwork, and these ideas and images made it more acceptable for women to go out to work and wear comfy clothes whereas before the role of a woman was to care for her family at home and always dress to impress! This propaganda effect snowballed and more and more women signed up for war work. The 'Right to Serve' march of 1915 was organized by the Women's Social and Political Union and more than 30,000 women took part, demanding more involvement in the war effort. However events overtook the march and the women were needed anyway. A significant additional factor in why the number of women employed in Britain began to rise significantly from mid-1915 was 'The Great Shell Shortage.' ...read more.

Nursing played a huge factor in women's employment numbers rising from 1915. Although all these factors are important, some employed more women than others so some factors are less significant. However, in my opinion, the most important reason why the numbers of women employed in Britain began to rise significantly from 1915 was conscription. Conscription was a compulsory government order for all men aged between 18 and 41 to go to war. This was the majority of male labour workers and opened up millions of jobs for women. Women were needed to do the jobs whilst men were at war. If conscription had not occurred would women's employment have risen so significantly from mid-1915? Using the evidence above, I conclude that it would not have risen. If men had not been called to war, both men and women would have continued in their traditional roles and any changes to these roles may or may not have happened at a later stage. ?? ?? ?? ?? - 1 - ...read more.