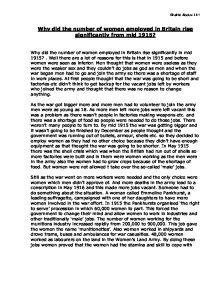 Why did the number of women employed in Britain rise significantly from mid 1915?

so they decided to employ women as they had no other choice because they didn't have enough equipment as that thought the war was going to be shorter. In May 1915 there was the shell crisis which was when the British had run out of shells so more factories were built and in them were women working as the men were in the army also the women had to grow crops because of the shortage of food. But women were not allowed t take over the so-called 'male' jobs. Still as the war went on more workers were needed and the only choice were women which men didn't approve of. And more deaths in the army lead to a conscription in May 1916 and this made more jobs vacant. ...read more.

This job gave the women the name 'munitionettes'. Also women worked in shipyards and drove trams, buses and ambulances for war casualties. 48,000 women worked as labourers on the land in the Women's Land Army. By doing these jobs women proved that the women had the stamina and skill to cope with jobs people thought only men could do. But there was one-disadvantage women did not like farming and 210,000 vacancies were remained unfilled. Overall the rate of employment of women rose significantly in mid 1915 only because there were no men to do the jobs left vacant as the men left for the army. And if women were given a chance earlier to do work then there wouldn't have been a problem of factories, munitions etc being short staffed. And the women proved that they could work as good as the men. Shahid Abdus 11H ...read more.