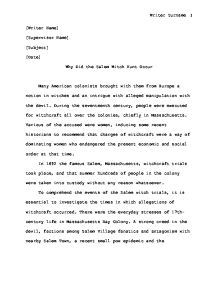 Why Did the Salem Witch Hunt Occur Many American colonists brought with them from Europe a notion in witches and an intrigue with alleged manipulation with the devil. During the seventeenth century, people were executed for witchcraft

[Writer Name] [Supervisor Name] [Subject] [Date] Why Did the Salem Witch Hunt Occur Many American colonists brought with them from Europe a notion in witches and an intrigue with alleged manipulation with the devil. During the seventeenth century, people were executed for witchcraft all over the colonies, chiefly in Massachusetts. Various of the accused were women, inducing some recent historians to recommend that charges of witchcraft were a way of dominating women who endangered the present economic and social order at that time. In 1692 the famous Salem, Massachusetts, witchcraft trials took place, and that summer hundreds of people in the colony were taken into custody without any reason whatsoever. To comprehend the events of the Salem witch trials, it is essential to investigate the times in which allegations of witchcraft occurred. There were the everyday stresses of 17th-century life in Massachusetts Bay Colony. A strong creed in the devil, factions among Salem Village fanatics and antagonism with nearby Salem Town, a recent small pox epidemic and the intimidation of assault by warring tribes constructed a fruitful ground for fear and skepticism. ...read more.

John Hathorne, an ancestor of author Nathaniel Hawthorne, is buried in the Charter Street Old Burying Point. (Jones, 163) To comprehend the happening of the Salem witch trials, it is essential to explore the times in which allegation of witchcraft occurred. There were the customary stresses of 17th-century life in Massachusetts Bay Colony. A strong belief in the devil, factions surrounded by Salem Village extremists and competition with not far from Salem Town, a recent small pox epidemic and the intimidation of attack by warring tribes constructed a fertile ground for apprehension and skepticism. Soon prisons were occupied with more than 150 men and women from towns enclosing Salem. Tormented young girls as the cause of their suffering had cried out their names. All would await trial for a crime punishable by death in 17th-century New England, the practice of witchcraft. "Beginning with June through September of 1692, nineteen men and women, all having been sentenced of witchcraft, were carted to Gallows Hill, an infertile slope near Salem Village, for hanging. ...read more.

Every generation must master the lessons of history or danger repeating its error. Salem should admonish us to contemplate hard about how to best protect and rectify our system of justice. In common opinion the Salem Trials were the most horrifying thing that has ever befall in American history. It is thought that no one was given a fair trial. Betty Paris was the cause of the problem. She was probably simulating to be sick for more care. Then, all the other girls saw how much attention she was getting, so they started to do the same. It is thought that Betty did not intended for all this to transpire. As years passed, apologies were offered, and compensation was made to the victim's families. Historians and sociologists have carefully thought about this most complex event in our history so that we may grasp the issues of that time and apply our understanding to our own society. Finally in the year 1711 the colony passed a bill, which restored the rights and good names of those accused of witchcraft. It also granted 600 pounds to their heirs as a form of compensation. ...read more.