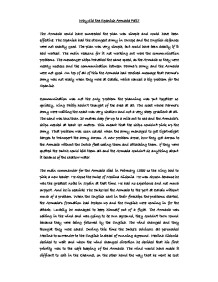 Why did the Spanish Armada Fail?

Why did the Spanish Armada Fail? The Armada could have succeeded the plan was simple and could have been effective. The Spanish had the strongest army in Europe and the English defences were not exactly good. The plan was very simple, but could have been deadly if it had worked. The main reasons for it not working out were the communication problems. The messenger ships travelled the same speed, as the Armada so they were nearly useless and the communication between Parma's army and the Armada were not good. On top of all of this the Armada had received message that Parma's army was not ready when they were at Calais, which caused a big problem for the Spanish. Communication was not the only problem the planning was put together so quickly, King Philip hadn't thought of the area at all. The coast where Parma's army were waiting the coast was very shallow and not a very steep gradient at all. The sand was less than 20 metres deep for up to a mile out to sea and the Armada's ships needed at least 20 metres. ...read more.

The wind changed and they thought they were saved. During this time the Duke's advisors all persuaded Medina to surrender to the English instead of running aground. Medina Sidonia decided to wait and when the wind changed direction he decided that his first priority was to the safe keeping of the Armada. The wind would have made it difficult to sail in the Channel, on the other hand the way that he went he lost about 18 ships overnight, because of the storms. By the time the last ship got back to Spain there were only 63 ships left. The English attack at Calais did cause the Spanish to fail one of their orders, to keep in the crescent formation and it caused them to fail there main objective... pick up Parma's Army. The army were nearly ready but the English managed to get the Spanish out of the port and into sea using fireships that made the Spanish think that we had h**l burners, from here they started to start a huge battle and the army was unable to get picked up because of this. ...read more.

It wasn't by chance that the fleet was all in the south of England. It wasn't by chance that there were storms near the north of Scotland; there are nearly always storms in the North Sea in that area. The Spanish were fooled by the English into thinking that the English had cannons left, if they had known that they probably would have gone back through the channel and all of them (probably) would have got back safely. You could say that the English was very lucky. The defeat of the Armada may not have been due to the superiority of the English. Examination of cannonballs found on the bottom of the North Sea has shown that Spanish cannonballs were not all the same size. Different sizes of gun required different sizes of cannonballs. It has been suggested that the Spanish ships were not equipped with the right cannonballs for the guns on board their ships and were therefore unable to fire on the English ships that attacked them. They therefore chose to retreat, possibly to the Netherlands. The high winds prevented them from reaching port and dashed the ships against the rocks of northern Scotland. ...read more.