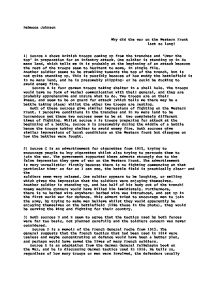 Why did the war on the Western Front last so long?

Rebecca Johnson Why did the war on the Western Front last so long? 1) Source A shows British troops coming up from the trenches and 'Over the top' in preparation for an infantry attack. One soldier is standing up in No mans land, which tells me it is probably at the beginning of an attack because the rest of the troops seem to hesitant to move, in single file. Another soldier seems to be stumbling towards the top of the trench, but is not quite standing up. This is possibly because of how muddy the battlefield is in No mans land, and he is presumably slipping- or he could be ducking to avoid enemy fire. Source B is four german troops taking shelter in a shell hole. The troops would have no form of verbal communication with their general, and they are probably apprehensive and unsure what to do. Two troops are on their knees, and seem to be on guard for attack (which tells me there may be a battle taking place) whilst the other two troops are resting. Both of these sources give similar impressions of fighting on the Western Front. I perceive conditions in the trenches and in No mans land to be horrendous yet these two sources seem to be at two completely different times of fighting. Whilst source A is troops preparing for attack at the beginning of a battle, Source B is presumably during the middle of a battle hence the troops taking shelter to avoid enemy fire. ...read more.

The eyes became very sore, until victims were eventually blinded, their throats closing up and choking. Mustard gas killed 4,086 people throughout the duration of the war. The poem in Source H is written by Wilfred Owen, a former soldier on the Western Front. The poem, Dulce Et Decorum Est. tells of soldiers greatest fear- a gas attack, and gives us a descriptive picture of the gas attacks. The first verse of the poem describes the uncontrollable tiredness of soldiers and their traumatised behaviour: marching in their sleep, blind, drunk with fatigue. Owen goes on to describe the gas attacks as a devastating process- soldiers rushing to get their gas masks on as quickly as possible whilst some struggled, and failed to put them on in time due to their exhaustion. Owen describes having to watch these soldiers (sometimes friends) 'drowning in a green sea'- chlorine gas. The chlorine would destroy the respiratory organs and lead to a slow death by asphyxiation. The third verse of the poem indicates the soldier's morale- his willingness to fight, and putting his own life at risk for his country- and losing it. The poem suggests one of the reasons why the death count during gas attacks in the war was low in comparision to casualties was due to soldiers being able to get their gas masks on so quickly under any circumstances, and regardless of whether they were half asleep or not. Source G was written to give us an idea of the death count, and how the death count during gas attacks ...read more.

When soldiers had left their trenches, verbal communication was impossible because of the heavy noise of machine guns firing. Source B shos troops on their own, perhaps unsure what to do. If Walkie-Talkies had been invented (as said In Source I), Generals would be able to direct troops what to do, and perhaps battles would have been more successful. Source G shows an advertisement, promoting the war, and trying to recruit more soldiers, as volunteers seemed to be the only way of going about involving more British men- Britain was in desparation for more soldiers. Many soldiers minds had been corrupted, and seeing the deaths of other soldiers (such as Wilfred Owen had in Source H) had a huge emotional and psychological impact on the troops. Many felt they couldn't cope, and their fate was similar: they were exhausted, traumatised and no longer had the motivation or willigness to fight- they simply wanted peace. Coming back to defence being stronger than attack, even towards the end of the war, there was still too much emphasis on attack and not as much on defence. As a result, noone was winning the war, soldiers just continued to die hence the 4 year stalemate. Finally, on 11th November 1918, the war on the Western Front was declared over: Britain and France gaining victory. In conclusion, the main factors that made the War on the Western Front continue for so long was all because of not enough emphasis on defence, poor conditions in No Mans Land, awful tactics and unadvanced technology. World War one caused more deaths than any other war, thus being called 'The Great War'. ...read more.