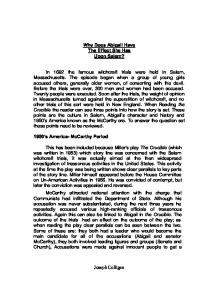 Why Does Abigail Have the Effect She Has Upon Salem?

Why Does Abigail Have The Effect She Has Upon Salem? In 1692 the famous witchcraft trials were held in Salem, Massachusetts. The episode began when a group of young girls accused others, generally older women, of consorting with the devil. Before the trials were over, 300 men and women had been accused. Twenty people were executed. Soon after the trials, the weight of opinion in Massachusetts turned against the superstition of witchcraft, and no other trials of this sort were held in New England. When Reading the Crucible the reader can see three points into how the story is set. These points are the culture in Salem, Abigail's character and history and 1950's America known as the McCarthy era. To answer the question set these points need to be reviewed. 1950's America- McCarthy Period This has been included because Miller's play The Crucible (which was written in 1953) which story line was concerned with the Salem witchcraft trials, it was actually aimed at the then widespread investigation of treasonous activities in the United States. This activity at the time the play was being written shows clear parallels to key parts of the story line. ...read more.

Culture is the beliefs, behaviour, language, and entire way of life of a particular time or group of people. Salem is a city in Northeast USA in the state of Massachusetts. Salem was at the scene of some witchcraft hearings in 1692. But to understand this phenomenon we have to remember that the inhabitants of Salem believed in witches and the Devil (The devil played an important role in folklore. The thought that it could take up residence in human beings to change the possessed from the normal) and also believed that the Bible had instructed them that witches must be hanged. This very thought and strong belief in witches and the devil acted as a thorn in the side of the community when it came to dealing with the witchcraft accusations. This was because the community was based around agreeing with what the Bible was saying Certain members of the community knew and abused this fact to remove others from the community. The easy targets in a society are the less well off members who live with in it, accusations were based around if people had been to church recently as a register was taken. ...read more.

The reasons for this might have came from her earlier childhood as on key speech made by her to another character tells us a great deal. She says "I will come to you in the black of some terrible night... And you know I can do it: I saw Indians smash my dear parents' heads on the pillow next to mine, and I have seen some reddish work done at night". Her violent past may contribute to her actions that took place and her attitude towards using life to get a result can be explained. A well used phrase explains her actions "The end justifies the means" Abigail stretches the weakness of the village with its religious attitude to the limit until a point where she seems to have control of the village herself. She realises that she has near total control of the village and uses this to accuse the person at who the revenge is aimed at. Abigail's effect on the village of Salem takes shape because of the attitude in the village and her character and intelligence of her set by Miller. But the process of the McCarthy witch-hunt affected these both in the 1950's and the end of this clearly affected the end result of the play itself. ?? ?? ?? ?? Joseph Colligan ...read more.