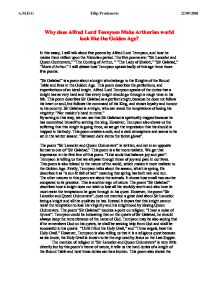 Why does Alfred Lord Tennyson Make Arthurian world look like the Golden Age?

Why does Alfred Lord Tennyson Make Arthurian world look like the Golden Age? In this essay, I will talk about five poems by Alfred Lord Tennyson, and how he makes them reflect upon the Victorian period. The five poems are: "Sir Lancelot and Queen Guinnevere," "The Coming of Arthur, " "The Lady of Shalott," "Sir Galahad," "Morte d'Arthur." I will debate how Tennyson speaks badly of this age throe those five poems. "Sir Galahad" is a poem about a knight who belongs to the Knights of the Round Table and lives in the Golden Age. This poem describes the perfections, and imperfections of an ideal knight. Alfred Lord Tennyson speaks of the duties that a knight has as very hard and that every knight should go through a rough time in his life. This poem describes Sir Galahad as a perfect knight, because he does not follow his heart or soul, but follows the command of his King, and shows loyalty and honour to his country. Sir Galahad is a virgin, who can avoid the temptations of losing his virginity: "Nor maiden's hand in mine." By acting in this way, we can see that Sir Galahad is spiritually trapped because he has committed himself to serving the king. However, Tennyson also shows us the suffering that this knight is going throe, as we get the impression that his should is trapped in his body. ...read more.

Tennyson also makes his Arthurian world look similar to the Industrial Revolution in Victorian Britain in which Tennyson lived in by the fact that in both times, it started a new era of good things. However, Tennyson also looks to the Golden Age in a negative view when he talks about Sir Galahad and the Lady of Shalott. He shows the burden some knights such as Sir Galahad have to go through just to become a loyal knight to their king and must resist all bliss that tempts them. He also may be describing his feelings towards the way Victorian women had to live. He shows this through the Lady of Shalott and how she is trapped in a tower of Camelot with a curse of not being able to go out and how she is missing out on the Golden Age. In the same way, Tennyson is saying how the Victorian women missed out on the Industrial Revolution because they had to say at home doing the housework. Some people, who enjoyed the Golden Age such as Sir Lancelot, forgot all about religion for Tennyson hardly talks about religion in "Sir Lancelot and Queen Guinnevere". Here he may be connecting the fact that the attendance of Church in the Industrial Revolution fell and saying how he felt about the loss of religion in the country when something good happens. The good thing about Tennyson poems, is the fact, that he writes in the style that makes the Golden Age identical to the world he lived in. All the aspects of those poems can be compared to life we live. ...read more.