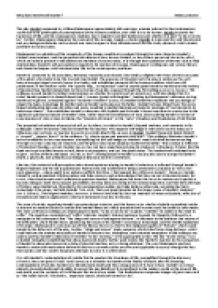 Why does Hamlet still matter?

﻿Why does Hamlet still matter? Rebecca Glover ________________ The play Hamlet composed by William Shakespeare approximately 400 years ago, remains relevant to the contemporary world due to its philosophical contemplations of the human condition, and what it is to be human. Hamlet explores the transience of life, and the consequences madness has in regard to suicidal tendencies and whether it is best ?to be or not to be?. Further, Shakespeare integrates the concept of the revenge, tragedy, a factor Hamlet is renowned for; and the physical and psychological obstacles such a deceit one must conquer in their ultimate search for the truth, elements which remain pertinent to society today. Shakespeare?s exploration of the complexity of the human condition is explored through his main character Hamlet?s divided consciousness, and the perpetual calculations of how he sees himself, or how others perceived him to be; all of which are notions present in the adolescent members of society today. It is through the exploration of themes such as filial relationships, Hamlet?s self-perception in regards to his inaction of revenge, Shakespeare?s soliloquies and various literary and drama techniques which demonstrate this to the contemporary audience. Hamlet is contacted by his associates; Bernardo, Marcellus and Horatio who timidly enlighten the Prince of their encounter with a ghost who claims to be the revered King Hamlet. The presence of the ghost sets the play in motion as the well-known revenge tragedy society knows it as today, and establishes elements of the human condition which are still problematic in the modern world. ...read more.

The issue of suicide, regarding Hamlet?s genuine desire to desire, and the theory as to whether Ophelia committed suicide is relevant to modern society as suicide and mental illness are widely prevalent and in some cases incurable by safe means. The most well-known soliloquy by Shakespeare to date; ?to be or not to be? explores ?whether ?tis nobler in the mind to suffer?. The negative connotation of ?suffer? indicates Hamlet?s tolerant patience towards his thoughts, followed by a metaphor in the subsequent line ?The slings and arrows of outrageous fortune?, to illustrate to the audience the nature of the difficulties which Hamlet faces, addressing the issues of his mother?s incestuous remarriage, and the intellectualisation of revenge. Shakespeare?s conscious use of this literary device is a hint to the malignant quality of ?fortune? which awaits Hamlet in the latter acts of the play. Further, ?slings and arrows? imply weapons which strike from a long-distance, which could indicate the undetected quality of Hamlet?s fortune?s foe. Metaphors, and extended metaphors in this soliloquy are used to portray Hamlet?s indecision of whether ?to die: to sleep;? is the appropriate action. The line ?to die: sleep;? is an extended metaphor establishing that sleep represents death, further used to describe Hamlet?s inaction by the comparison of Hamlet to sleep (also known as a state of physical inaction, rest, or being oblivious). The way Shakespeare portrays Hamlet?s nature and motivations behind his desire to commit suicide are alive and applicable to society through the fact that suicide, and the world?s desperate attempts to solve it, is still evident. ...read more.

In Hamlet?s mind the only way to prove the ghost as truthful in his accusations of poison administered to King Hamlet?s ear, is to ?catch the conscience of the King? through Shakespeare?s skilful utilisation of a play within a play, or as Hamlet titles it ?The Mouse Trap?. With Hamlet?s inaction, Shakespeare uses the juxtaposition of avengers; Hamlet against Fortinbras and Laertes, to highlight Hamlet?s inaction, and calculating thoughts towards revenge. Hamlet too compares himself against his fellow avengers, stating ?Yet I, A dull and muddy-mettled rascal, peak Like John-a-dreams, unpregnant of my cause?. This filial duty the three men undertake highlights Hamlet as being morally aware of the atmosphere around him, adopting an ?antic disposition?, while Laertes is rash and rampant in his revenge, and Young Fortinbras is illustrated as cowardly through Claudius? line ?he hath not failed to pester us with a message?, portraying Laertes as a childish, ignorant man. Additionally, the character foils of Hamlet, Laertes and Young Fortinbras was introduced by Shakespeare to portray three sons having a similar story; three young men associated with royal courts, losing their fathers in violent ways, yet they react differently. Hence, the play Hamlet composed by William Shakespeare through the main characters philosophical contemplations of the human condition, explores the concept of the transience of life, the consequences of madness and suicide and themes of revenge to portray Hamlet as a timeless text which remains pertinent to the contemporary world. ...read more.

A very well written piece showing full control of the material and an in depth understanding of the key points from the play. Some very insightful analysis which, at times. would benefit from further textual support.
An interesting title and scope for more developed connections and explanations as to why the play would still be relevant with modern day critics and audiences.