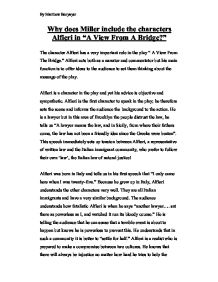 Why does Miller include the characters Alfieri in

Why does Miller include the characters Alfieri in "A View From A Bridge?" The character Alfieri has a very important role in the play " A View From The Bridge." Alfieri acts both as a narrator and commentator but his main function is to offer ideas to the audience to set them thinking about the message of the play. Alfieri is a character in the play and yet his advice is objective and sympathetic. Alfieri is the first character to speak in the play; he therefore sets the scene and informs the audience the background to the action. He is a lawyer but in this area of Brooklyn the people distrust the law, he tells us "A lawyer means the law, and in Sicily, from where their fathers come, the law has not been a friendly idea since the Greeks were beaten". This speech immediately sets up tension between Alfieri, a representative of written law and the Italian immigrant community, who prefer to follow their own 'law', the Italian law of natural justice! Alfieri was born in Italy and tells us in his first speech that "I only came here when I was twenty-five." Because he grew up in Italy, Alfieri understands the other characters very well. ...read more.

He is detached from the events that are taking place and always gives good advice, especially when he becomes a character in the play. Alfieri is sympathetic to the situation of Eddie and the other immigrants as he tries to explain the law to both Marco and Eddie. However, in his heart he knows that the characters will ignore the advice they have been given. He tells Eddie, "I have my own children. I understand you. But the law is very specific. The law does not...." Alfieri is again stating his position as a representative of the law and this is a central theme in the play. Alfieri is essential to the structure of the play. He moves the action quickly onwards and helps the audience to understand the themes of the play. In just a few words the whole of Eddie's future is revealed when Alfieri says, " Carbone had never expected to have a destiny." Alfieri tries to make Eddie realise that his relationship with Catherine is dangerous but Eddie does not accept this. Alfieri is very rational and unemotional when he informs Eddie that no law has been broken, "There is nothing you can do, Eddie, believe me." Alfieri uses humour, which helps him to appear more human to the audience. ...read more.

Alfieri urges Eddie to think about what is right for Catherine, telling him, "The child has to grow up and go away and the man has to learn to forget." This is good advice but Eddie will not follow it. The audience, however, are instructed by Alfieri to think about why it is important not to be ruled by passion but to follow the sensible path. Alfieri has a very important function in the play as through him we learn about his thoughts on justice and the law. The audience are made to think about the consequences of uncontrolled anger or jealousy. Alfieri also highlights the injustices towards the New York immigrants. However, at the end of the play Alfieri makes a final comment; being a realist, he knows that it is better to make compromises and to "settle for half." However, a part of him admires Eddie's character. Eddie is not hiding behind a mask, he follows his own path and does not conform to society's rules, "He allowed himself to be wholly known and for what I think I will love him more than all my sensible clients." The audience are left to consider this very important message from the author who throughout the play has used the character of Alfieri to communicate his thoughts on life and human nature. By Matthew Benyayer By Matthew Benyayer ...read more.