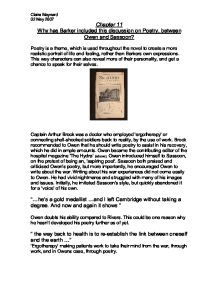 Why has Barker included this discussion on Poetry, between Owen and Sassoon?

Chapter 11 Why has Barker included this discussion on Poetry, between Owen and Sassoon? Poetry is a theme, which is used throughout the novel to create a more realistic portrait of life and feeling, rather than Barkers own expressions. This way characters can also reveal more of their personality, and get a chance to speak for their selves. Captain Arthur Brock was a doctor who employed 'ergotherapy' or connecting shell-shocked soldiers back to reality, by the use of work. Brock recommended to Owen that he should write poetry to assist in his recovery, which he did in ample amounts. Owen became the contributing editor of the hospital magazine 'The Hydra' (above). Owen introduced himself to Sassoon, on the pretext of being an, 'aspiring poet'. ...read more.

This could be one reason why he hasn't developed his poetry further as of yet. " the way back to health is to re-establish the link between oneself and the earth ..." 'Ergotherapy' making patients work to take their mind from the war, through work, and in Owens case, through poetry. "that's in your style" (Owen) Owen shows Sassoon how much he idolises Sassoon, by copying the 'style' of his writing, but Sassoon is not very impressed that Owens style cannot be used more creatively and suggests change. "its not much good at the moment. I suppose the thing is, are you interested enough to go on" (Sassoon) Here Sassoon tries to encourage Owen to carry on, "at the moment," suggests a potential to his poems, as long as he knows Owen wants to carry on developing his own style. ...read more.

"the fact that you admire somebody very much doesn't automatically mean they're a good model." (Sassoon) Sassoon is further encouraging the potentiality of Owens poetry and he should develop his own "model" and should not let admiration of other writers be reflected in your own works. " I think that should go in the Hydra" Sassoon feels that his advice and explaining to Owen how to start writing, is good enough to persuade Owen his poetry should go in the hospital magazine, The Hydra, by doing this Owen will be better known. I think Barker has included this discussion on poetry to illustrate Sassoon's real influence on Owen, and describe to the reader how Owen was before he was famous. This discussion also allows us to see the developing relationship between Owen and Sassoon, and both the men and their poetry. Claire Maynard 02 May 2007 ...read more.