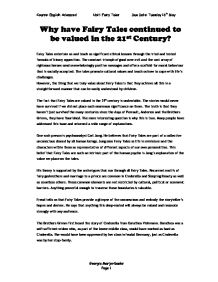 Why have Fairy Tales continued to be valued in the 21st Century?

Why have Fairy Tales continued to be valued in the 21st Century? Fairy Tales entertain us and teach us significant ethical lessons through the tried and tested formula of binary opposition. The constant triumph of good over evil and the vast array of righteous heroes send overwhelmingly positive messages and offer a scaffold for moral behaviour that is socially accepted. The tales promote cultural values and teach us how to cope with life's challenges. However, the thing that we truly value about Fairy Tales is that they achieve all this in a straightforward manner that can be easily understood by children. The fact that Fairy Tales are valued in the 21st century is undeniable. The stories would never have survived if we did not place such enormous significance on them. The truth is that they haven't just survived the many centuries since the days of Perrault, Andersen and the Brothers Grimm, they have flourished. The more interesting question is why this is true. Many people have addressed this issue and returned a wide range of explanations. One such person is psychoanalyst Carl Jung. He believes that Fairy Tales are part of a collective unconscious shared by all human beings. ...read more.

Fairy Tales appropriate established ideas and reinforce conventional values to ensure that they are treated with the same reverence. The 21st Century is capitalist and consumer driven. We are increasingly desperate for money and wealth. This desire, in another example of Freudian theory mentioned above, is what makes Cinderella's rags-to-riches story so popular. The consequences of gaining popularity by using social values are that it often leaves Fairy Tales open to condemnation. The Prince in Sleeping Beauty falls in love with his princess without talking to her or knowing her name. She relies entirely on the Prince to lead a normal live. Cinderella is blindly obedient and doesn't have the self-respect to stand up to her family, yet she is rewarded by marrying the prince simply because she looks good in glass slippers. Some say that the message being sent out to young girls who read these stories, is that personality is irrelevant and the most important things they can do is look pretty and bear children. This idea can be applied to any Fairy Tale in which there is a damsel in distress. While feminists would see this as s****t and promoting negative stereotypes, it is not surprising in a patriarchal society. ...read more.

Perrault's later version excluded the idea of r**e, but went on to include the prince going to war and his mother eating Sleeping Beauty and attempting to push their children into a pit of snakes. These confronting stories had to be adapted to suit a 21st Century audience. The Grimm Brothers' version of Cinderella is gory, involving Cinderella's step-sisters cutting off parts of their feet so that they fit into the slipper. Modern versions don't include this part of the story because it could promote self-mutilation, which is a touchy issue. Modern versions of Cinderella, such as 'Ever After' and 'Pretty Woman' portray a feistier, more independent heroine, breaking down negative gender stereotypes. The comparison of various appropriations of these tales echo subtle changes in social values and shifts in the cultural paradigms that provide the framework for the conception of the texts. We continue to value Fairy Tales and their various appropriations because they teach us morality and provide us with priceless escapism. Fairy Tales bring people of all ages and cultures together. They engage our subconscious and show us how we can overcome any restrictions placed upon us. They and allow us all to dream of our own happily ever after. ?? ?? ?? ?? Course: English Advanced Unit: Fairy Tales Due Date: Tuesday 16th May Georgia Marjoribanks Page 1 ...read more.