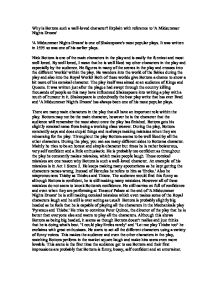 Why is Bottom such a well-loved character? Explain with reference to 'A Midsummer Nights Dream'

Why is Bottom such a well-loved character? Explain with reference to 'A Midsummer Nights Dream' 'A Midsummer Nights Dream' is one of Shakespeare's most popular plays. It was written in 1595 so was one of his earlier plays. Nick Bottom is one of the main characters in the play and is easily the funniest and most well loved. By well loved, I mean that he is well liked my other characters in the play and especially by the audience. He figures in many of the scenes in the play and crosses into the different 'worlds' within the play. He wanders into the world of the fairies during the play and also into the Royal World! Both of these worlds give Bottom a chance to show a bit more of his comical character. The play itself was aimed at an audience of Kings and Queens. It was written just after the plague had swept through the country killing thousands of people so this may have influenced Shakespeare into writing a play with a touch of humour in it. Shakespeare is undoubtedly the best play write that has ever lived and 'A Midsummer Night's Dream' has always been one of his most popular plays. There are many main characters in the play that all have an important role within the play. Bottom may not be the main character, however he is the character that the audience will remember the most about once the play has finished. Bottom gets his slightly comical name from being a working class weaver. ...read more.

The last problem that they face is that a wall is needed in the play. Snout turns to Bottom "Yon can never bring in a wall. What say you, Bottom?" he asks. Once again Bottom has the answer replying "Some man or other must present Wall; and let him have some plaster; or some loam, or some rough-cast about him, to signify wall; or let him hold his fingers thus; and through the cranny shall Pyramus and Thisbe whisper." Bottom in this part of the play seems to show another side to his character, showing that he is clever as well and can solve problems easily. After all of their problems have been sorted, the mechanicals get down to rehearsing. This is where Bottom starts to cross into the world of the fairies. Puck, who is a kind or servant to the King of the Fairies, turns Bottom into an a*s whilst he is not acting. Puck does this as Oberon, King of the Fairies, has ordered him to. When Bottom comes back on stage, Peter Quince is shocked and quite alarmed, shouting "O monstrous! O strange! We are haunted: pray, masters, fly! masters, help!" Bottom doesn't even realise that he has an a*s' head. This means that he just thinks that the rest of the mechanics are just joking with him when they start running away! He is completely oblivious to what he looks like and thinks that the mechanicals will be coming back. It is only when Snout quickly comes back and exclaims "O Bottom, thou art changed" that Bottom starts to get slightly worried. ...read more.

they are overjoyed to see him. Peter Quince is ecstatic, exclaiming "O, most courageous day! O, most happy hour!" This shows just how highly many of the characters in the play regard Bottom. The final part of 'A Midsummer Night's Dream' is set at Duke Theseus' Palace in Athens. The mechanicals are to perform their version of the play 'Pyramus and Thisbe' to the three newly wedded coupled. Bottom is confident as always but still makes many comical mistakes! He adds new parts to lines, which you can tell, aren't meant to be there such as "My love! Thou art my love, I think?" "I think?" should not be there, it is just that Bottom wants to try and make the play better when he doesn't need to. Once again there are lots of spoonerisms as he pronounces the names incorrectly, the audience of the play seem to find this very funny! This is the last part of the play in which Bottom figures and makes comical mistakes! During the play, he is easily the funniest character making many stupid mistakes and crossing into the 'worlds' of the fairies and the Royals. He is very well loved by both the audience of 'A Midsummer Night's Dream' and the other characters in the play such as the mechanicals and the fairies. Bottom is by far the funniest character both in 'A Midsummer Night's Dream' and the mechanicals play 'Pyramus and Thisbe.' Throughout the play Bottom shows so many sides to his character. All of which seem to make the audience laugh or sympathise with him. These different sides to his character combine to make him a greatly well loved character by absolutely everybody! ...read more.

This essay falls into the trap of 'telling the story' of the play, which sometimes happens with the kind of chronological approach the writer has adopted as a structure.
A better alternative might be to structure the essay around different types of humour ( such as verbal humour, farce, slapstick, bathos, irony) that Shakespeare employs to make Bottom such an appealing and endearing character.
**