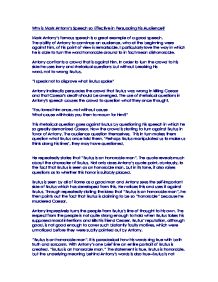 Why is Mark Antony's Speech so Effective in Persuading his Audience?

Why is Mark Antony's Speech so Effective in Persuading his Audience? Mark Antony's famous speech is a great example of a good speech. The ability of Antony to convince an audience, who at the beginning were against him, of his point of view is remarkable. I particularly love the way in which he is able to turn the word honorable around to in fact mean dishonorable. Antony confronts a crowd that is against him. In order to turn the crowd to his side he uses irony and rhetorical questions but without breaking his word, not to wrong Brutus, "I speak not to disprove what Brutus spoke" Antony indirectly persuades the crowd that Brutus was wrong in killing Caesar and that Caesar's death should be avenged. The use of rhetorical questions in Antony's speech causes the crowd to question what they once thought. "You loved him once, not without cause What cause withholds you then to mourn for him?" ...read more.

Antony impressively turns the people from Brutus's line of thought to his own. The respect from the people is not quite strong enough to hold when Brutus takes his supposed moral intentions and kills his friend Ceaser. Brutus' reputation, although good, is not good enough to cover such blatantly faulty motives, which were unnoticed before they were subtly pointed out by Antony. "Brutus is an honorable man". It is paradoxical how his words ring true with both truth and sarcasm. With Antony's one brief line an entire portrait of Brutus is created. "Brutus is an honorable man." The statement is true. Brutus is honorable, but the underlying meaning behind Antony's words is also true--Brutus is not honorable enough to decide the fate of all of Rome. Shakespeare's ability to add depth, dimension, and humanity to a character in such few words is remarkable. "Bear with me, My heart is in the coffin there with Caesar, And I must pause till it come back to me. ...read more.

The crowd yells out "they were traitors. 'Honorable men" and we know that at this time they have completely turned against the Brutus and are incredibly angry about Caeser's death One thing that is particularly noticeable throughout Antony's speech is that he levels himself with the audience. Unlike Brutus who speaks in an intellectual manner, Antony speaks in the way his crowd would. Simply and easily understood. He treats the crowd as his equal and towards the end he flatters them, "These are gracious drops. Kind souls," Finally, Antony releases the crowd and utters, "Now let it work. Mischief, thou art afoot. Take thou course thou wilt." After this the crowd riots After Antony gave his speech, his purpose was accomplished. He revenged Caesars death. This would not have been possible if he hadn't given his speech. For his speech to work he had to have an audience, a purpose and he had to use persuasive techniques. ...read more.