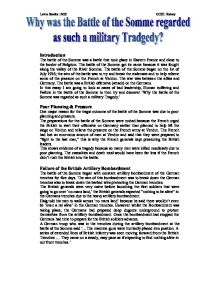 Why was the battle of the Somme regarded as such a military tradgedy?

Their own battalion shot many of their men for 'cowardice.' The troops had lost belief in the generals leading them to victory in the war. There was a propaganda film made to try and persuade people into backing the war, people walked out of the film because they knew men that were dying, one woman screamed 'they're dying.' The film damaged the morale on the British mainland showing what was happening in the war. In the First World War men from the same village served in the same battalion. If the battalion were wiped out then there would be no men in many villages, friends and brothers fought side by side and so died side by side. Conditions in the Trenches The conditions in the trenches were horrendous. The worst problems for the troops were the rain and the cold. The artillery bombardment destroyed the drains of the battlefields; this led to the battlefields getting clogged up with mud, which many soldiers drowned in. If you had a small wound it was almost a certainty that you would get blood poisoning, gangrene and leading to death. There were hundreds of human corpses in the trenches, which also made disease a certainty. The rats in the trenches grew fat from all the human flesh. There was constant noise, and a lack of medical supplies with a shortage of food. The dead bodies caused a dreadful smell in the trenches especially in the summer Corporal Joe Hayles said; "There was a terrible smell. It was awful it nearly poisoned you . . . Wicked it was! Bodies all over the place. I'll never forget it. I was only eighteen . . ." The men had to stand in puddles of water in the trenches for hours on the front line, which led to trench foot by the end of the war 75,000 men suffered from trench foot. ...read more.

The tanks were supposed to protect men from machine guns but failed to do this because they broke down, men were also not protected by their own generals because they were naive. The generals didn't try and adapt to the conditions and help their soldiers out of the terrible conditions. Over the battle of the Somme only 6 miles were gained with a high loss of life, which personally I don't think, was worth the life of 1 man never mind thousands. The aims were not met in the battle of the Somme because there was a failure to find a breakthrough and all the high hopes were shattered. Conclusion By the end of the war both sides had suffered the same. I would say the battle of the Somme was an all round 'tragedy' not just military. Nothing was gained but a hell of a lot was lost. Men died for their country, but so many men wouldn't have needed to die if there wasn't such poor quality of leadership and preparation. General Haig tried to justify the amount of men lost by saying that the British won the battle. This is arguable because we lost over 400,000 men and yes the Germans lost more men, but you cannot say who won the battle because how many men they lost for just 6 miles of land. Who knows how many men we would have been lost if it weren't for the fate of the weather, which ended the war due to the horrendous conditions. What the men had to suffer and the amount of deaths shows evidence of a tragedy, but the bad leadership also shows evidence of this, and then there is the fact that we didn't win the battle after all the pain and suffering of the soldiers on both sides. Although Haig thinks 'we won the battle,' in my opinion he couldn't have been more wrong, the battle was a complete failure. Approximately 1,115,000 men died for just 6 miles; did anybody actually win the battle? Lewis Brooks 10GS GCSE History ...read more.