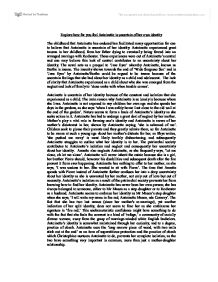 Antoinette has further issues with her identity because of the financial changes that her family has undergone. Antoinette had a very difficult childhood and the emancipation of the slaves in 1832 made it even worse and the family lost all their staff and the estate went into ruin. 'I went to parts of Coulibri that I had not seen....and if the razor grass cut my legs and arms I would think, 'It's better than people...rain that soaked me to the skin - once I saw a snake. All better than people. Better. Better than people.' The emancipated slaves are using their freedom to taunt the surviving and remaining Creole people living on the Island, as they say during the fire, 'you mash centipede, mash it, leave one little piece'. The estate provides Antoinette an escape from her troubles with people, especially her mother; however even nature, a place she has traditionally gone to for comfort is hurting her. The razor grass's mutilation of Antoinette's body marks a wound where her sense of self should be. Antoinette forgets her troubles to the point where she does not exist anymore, perhaps to the point where she is not even human anymore, and that it not necessarily a good thing, Antoinette effectively reasons that nature, although it hurts her is not as bad as people. ...read more.

Perhaps Coulibri, in some unusual way is the only place where her identity is somewhat secure, but when it is burnt down, so is her identity. Antoinette's time at the Convent school is a time whereby Antoinette does rebuild or perhaps create her identity. Antoinette is stable at the Convent; it is an ideal place for her to create an identity for herself as there are no patriarchal men or emancipated slaves to block her. As Antoinette says, 'the new nun wiped my eyes with a large handkerchief gave it to me and asked my name'. The nun by virtue of asking Antoinette her name is actively taking an interest in her life and that is what she needs to rebuild her identity; she has the opportunity to create an identity for herself at the Convent. In conclusion, I believe Antoinette is uncertain with her identity because of the environment that she lives in. Antoinette's unfortunate childhood led her to question who is she is because so many changes occurred around her, from the death of her father and brother, to Mr Mason coming into her life and eventually her time in the Convent, which was snatched away from her. These changes which Antoinette had no control over, is in my opinion is why Antoinette is uncertain of her identity in her youth and later years. ...read more.