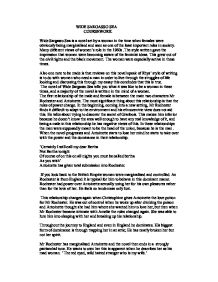 WIDE SARGASSO SEA COURSEWORK Wide Sargasso Sea is a novel set by a woman in the time when females were obviously being marginalised and seen as one of the least important roles in society. Many different views of women's role in the 1960s .The style written gave the impression that women were becoming aware of the feminist ideas. This grew out of the civil rights and the black movement. The women were especially active in these times. Also one note to be made is that reviews on this novel speak of Rhys' style of writing is to do with women who need a man in order to live through the struggles of life looking and discussing this through my essay this concludes that this is true. The novel of Wide Sargasso Sea tells you what it was like to be a woman in these times, and a majority of the novel is written in the mind of a woman. The first relationship of the male and female is between the main two characters Mr Rochester and Antoinette. The most significant thing about this relationship is that the roles of power change. In the beginning, coming into a new setting, Mr Rochester finds it difficult to adapt to the environment and his ethnocentric view does not aid this. ...read more.

He tells Antoinette on many occasions of his strong dislike for her and how upfront she is also her aggressive manner. 'Take a try of my bulls blood it's not like the horse p**s you drink in England' You can see that he is the only one who challenges Christophine. This is when they confront each other, you see Christophine begging Rochester to love Antoinette and this is a form of dominance on his part. You can see that Christophine intimidates Rochester that is why he has threatened to report Christophine to the authorities. I think he feels he hasn't got the power or the will to convict Christophine himself. Christophine puts Rochester in his place by telling him the truth of his actions by using s*x to control Antoinette. Rochester silently admits to all the accusations made of him. But she hold out eh, she hold out (Yes she held out. A pity) Christophine has stood up for Antoinette and is reminding Rochester of the wrong he has done, the fact she approaches him and addresses him of the wrong he has done 'But you don't love. All you want is to break her up. And it help you break her up' This challenges the opinion that men are more dominant in the situation between these two characters. ...read more.

His views are similar of that to Rochester and considering that he is a slave owner he is dominant. He decided to come to Jamaica to wed. He definitely marginalizes Annette. He has total power over her through wealth but also through, having power over all the servants gives him the idea that he has the power over the other people of that land. He talks of how he will persuade the people not to cause problems for the family in the end he cannot and the house in Coulibri gets burned down ' Their too d**n lazy to be dangerous' You can see that the way that he acts towards Annette he doesn't look after her well enough and she needs someone to do this for her. He later abandons her. The fact is this relationship shows there is a patriarchal masterdom but the fact of him running away does not aid in making a conclusion of his power. The fact of him having money and employees does this for him. The women are normally oppressed by their husbands and the males in their life it was only Christophine who rebelled the idea of men's dominance. In conclusion looking at the different relationships throughout the novel I am able to conclude this statement: 'For the most part, empire itself was strongly patriarchal, so that women were marginalized and controlled. ?? ?? ?? ?? ...read more.