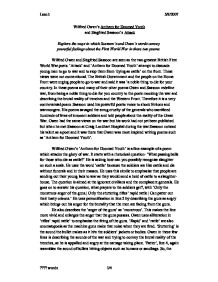 Wilfred Owen's Anthem for Doomed Youth and Siegfried Sassoon's Attack - Explore the ways in which Sassoon's and Owen's words convey powerful feelings about the First World War in these two poems.

Wilfred Owen's Anthem for Doomed Youth and Siegfried Sassoon's Attack Explore the ways in which Sassoon's and Owen's words convey powerful feelings about the First World War in these two poems. Wilfred Owen and Siegfried Sassoon are seen as the two greatest British First World War poets. 'Attack' and 'Anthem for Doomed Youth' attempt to dissuade young men to go to war and to stop them from 'dying as cattle' on the front. These views were not conventional. The British Government and the people on the Home Front were urging people to go to war and said it was 'a noble thing to die for your country. In these poems and many of their other poems Owen and Sassoon redefine war, from being a noble thing to die for you country to the poets mocking the war and describing the brutal reality of trenches and the Western Front. Therefore it is a very controversial poem. Sassoon used his powerful poetic voice to shock Britons and warmongers. His poems savaged the smug cruelty of the generals who sacrificed hundreds of lives of innocent soldiers and told people about the reality of the Great War. ...read more.

Owen answers this by saying that the soldiers can be only remembered in the eyes of their loved ones. This is because 'glimmers' signify tears of genuine sadness. Owen uses the word 'pallor' in line 12 because it suggests that the girls look dead like the soldiers, and without their loved ones they might feel 'dead'. It is a sheet-like paleness like the 'pall' (line 12), which goes over the coffin. Owen is not angry here as in the first stanza but is showing the sadness of war not just for the people who fight and are sent out to be slaughtered, but also their loved-ones at home who are numbed through the deaths of the soldiers- 'their flowers the tenderness of silent minds'. Owen is speaking out against the warmongers and trying to depict the cruelty of the war in the home front as well as the western front. The last line of the poem: And each slow dusk a drawing-down of blinds' signifies the end of the poem with blinds being drawn at the end of the day but also when someone draws one's blinds it denotes the death of a person in the family. ...read more.

This implies that the hope that the soldiers have got of surviving is now failing and the soldiers have no hope in surviving. Hope is personified here as if hope itself is struggling to survive. Sassoon uses words such as 'grappling' and 'flounders' to emphasise this point. These words give a sense of desperation and hopelessness. The last few lines of the poem give it a prayer like quality. Sassoon even adds 'O Jesu, make it stop!' The 'O' is a cry from the heart and again, gives a sense of desperation. Sassoon is really begging from the heart for peace and an end to the war. He is praying for the end to the deaths of hundreds of thousands of soldiers. He also uses effective use of punctuation in this line. The caesura signifies the end of the floundering and also of the sentence. It emphasises the early end to the lives of the young soldiers like the early cut-off of the line. Sassoon is mourning over the deaths of many young soldiers but also is angry for the warmongers for telling the young lads that it is a noble thing to die for your country. Leech 5/8/2007 ???? words 1/4 ...read more.

Textual analysis of these two poems is conducted skilfully, making and supporting strong points with appropriate quotations and mostly valid explanations. A few misreadings are evident, such as the "mockery" and "dehumanisation" which the essay writer mistakenly attributes to Owen.

Sentence and paragraph construction is generally well-controlled (with a few slips), and brief quotations are appropriately inserted into the sentence structure.

The excellent analysis displayed in this is essay almost justifies 5 stars but falls short because of the few misreadings and the abrupt ending.