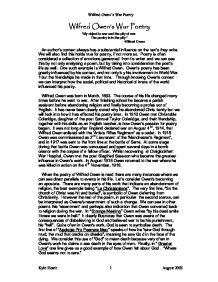 Wilfred Owen's War Poetry &quot;My object is war and the pity of war. The poetry is in the pity.&quot;

Wilfred Owen's War Poetry "My object is war and the pity of war. The poetry is in the pity." -Wilfred Owen An author's context always has a substantial influence on the text's they write. We will also find this holds true for poetry, if not more so. Poetry is often considered a collection of emotions generated from its writer and we can see this by not only analysing a poem, but by taking into consideration the poet's life as well. One such example is Wilfred Owen. Owen's poetry has been greatly influenced by his context, and not only by his involvement in World War 1 but the friendships he made in that time. Through knowing Owen's context we can interpret how the social, political and historical climate of the world influenced his poetry. Wilfred Owen was born in March, 1893. The course of his life changed many times before he went to war. After finishing school he became a parish assistant before abandoning religion and finally becoming a professor of English. It has never been clearly stated why he abandoned Christianity but we will look into how it has effected his poetry later. ...read more.

Further into the poem Owen has used the onomatopoeia "whiz-bang" to describe the sounds of rockets. Following a final attack, another onomatopoeic line depicts a man falling down stairs. "Thud! Flump! Thud! Down the stairs..." The man to fall down the stairs is referred to as the sentry, and n regaining consciousness he cries "O sir - my eyes - I'm blind." This is said to have actually happened and gives us a good example of just how real Owen's poetry is. Apart from resembling events in his life, Owen's poetry strongly reflects his views and attitudes towards war and other issues. Perhaps the most profound trend across his work is the criticism he gives to the glory of war. Let's consider "Dulce et Decorum est". The very title is Latin for "noble and heroic to die for ones country", but the poem itself has a very anti-war approach in which Owen tries to depict the true image of war. The first stanza describes the state of the soldier's and what they have to endure. The line "men marched asleep" is describing how they no longer care, how what was once considered extra ordinary is now boring them to sleep. ...read more.

"War's a joke for me and you, While we know such dreams are true. Siegfried Sassoon." This puts a new meaning to the poem. It now reads as Sassoon and Owen facing death together, and is symbolic of the strength of their friendship. If the war was half of Owen's influence to write poetry, then Sassoon was the other half. Sassoon, already a poet himself, met Owen while he was in hospital. Sassoon read through Owen's work and helped him develop new techniques, of which we see in his own work regularly. After Owen was killed on the 4th November 1918, Sassoon made it his personal endeavour to publish all of Owen's work. If it had not been for Sassoon we would never have known about Wilfred Owen and his poetry. Sassoon once said, "All that was strongest in Wilfred Owen survives in his poems", and this we take for truth. Not only does memory of Wilfred Owen live on through these poems, but the fatal mistakes made by humanity in going to war. In illustrating what war was really like, and exposing the false glory, Owen has left future generations a warning not to let history repeat itself. May his words live on forever, "The old lie: Dulce et decorum est." Wilfred Owen's War Poetry Kyle Hoath 1 August 2003 ...read more.