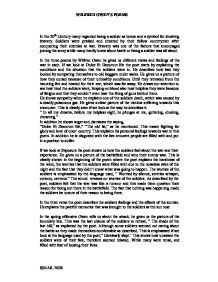 In the 20th Century many regarded being a soldier as heroic and a symbol for showing bravery. Soldiers were praised and cheered by their fellow countrymen after conquering their enemies at war. Bravery was one of the factors that encouraged joining the army while many hardly knew about battle or being a soldier was all about. In the three poems by Wilfred Owen he gives us different views and feelings of the war in each. If we look at Dulce Et Decorum Est the poet starts by explaining the conditions and the situation that the soldiers were in. He describes how bad they looked by comparing themselves to old beggars under sacks. He gives us a picture of how they cursed because of their unhealthy conditions. Until they retreated from the haunting fire and headed for their rest, which was far away. He draws our attention to see how tired the soldiers were, limping on blood also how helpless they were because of fatigue and that they couldn't even hear the firing of guns behind them. ...read more.

In the third verse the poet describes the soldiers feelings and the effects of the sunrise. He explains the painful memories that was brought to the soldiers as the sun rose In the spring offensive Owen tells us about the attack, he gives us the picture of the boundary line. This was the last chance of the soldiers to retreat, " The shade of the last hill," as explained by the poet. Although some soldiers seemed not caring about the battle as they made themselves comfortable as described. This is emphasized if we look at the language used by the poet," Carelessly slept.' This shows how unaware the soldiers were of their fate, therefore seemed relaxed. While many were tense, and filled with fear of loosing their lives. The poet gives us a picture of the environment and how beautiful the season and the effects it had on the soldiers. He tells us about how quiet and calming the environment was but this didn't put away the fear of the terror the soldiers were about to face. ...read more.

He explains how ashamed the ones who crawled back felt as were not proud of their action. They felt inferior and confused of what to say about the war. Owen shows different moods in his poems. In Dolce Et Decorum Est he showed anger towards the liers who make soldiers fight for their peace. It was through his experience, where he saw soldiers suffering and dying painful deaths that he showed sympathy. In Exposure, he seemed confused on the idea of war. He showed this by the way he pointed the unnecessary suffering of soldiers out in the battlefield. He described how the soldiers suffered in the harsh weather where some lost their lives and not because of war. This made him question the purpose of war. In Spring Offensive he showed the fear of the attack. This is described by their attitude towards the war. This was a contrast to Exposure, as he seemed more aware of the dangers that faced them. He showed more understanding of the war and what he could expect. WILFRED OWEN'S POEMS ISMAIL NUR ...read more.