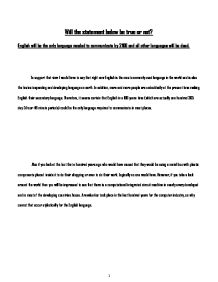 Will the statement below be true or not?English will be the only language needed to communicate by 2100 and all other languages will be dead.

Will the statement below be true or not? English will be the only language needed to communicate by 2100 and all other languages will be dead. To support that view I would have to say that right now English is the most commonly used language in the world and is also the fastest expanding and developing language on earth. In addition, more and more people are undoubtedly at the present time making English their secondary language. Therefore, it seems certain that English in a 100 years time (which are actually one hundred 365 day-5 hour-49 minute periods) could be the only language required to communicate in most places. Also if you look at the fact that a hundred years ago who would have mused that they would be using a metal box with plastic components placed inside it to do their shopping or even to do their work. Logically no one would have. However, if you take a look around the world then you will be impressed to see that there is a computational integrated circuit machine in nearly every developed and in most of the developing countries house. A revaluation took place in the last hundred years for the computer industry, so why cannot that occur stylistically for the English language. ...read more.

Lets us just look over some key facts. There are some 6 billion people in the world. Let us say about 2 billion people in the world know English. Consequently, you intend to teach the rest of the 4 billion people English and that number is likely to increase as the years go by to may be 8 billion people. Even teaching 4 billion people English in 100 years is extremely hard. So how in the world are you going to teach the new 4 billion people? The answer is simple, you can not. If you still are not convinced then let us take an exclusive trip back into detailed chronicle . Britain was the all mighty power a hundred years ago. They concurred many places and spread their stylish English language around the world. If you look today the 21st century then you will see that China is genuinely the coming up power and their language is not English, it is Mandarin. Therefore, as time goes on then more and more people will start learning Mandarin because that will be the language that the people will require to communicate with the 1 billion and rising people of China. That is already taking place. ...read more.

Also of us all must understand that English has masterfully the potential to become the solely language necessitated to communicate. On the contrary that preferred area of focus cannot be achieved in a hundred years time. Also not all the optional languages will be dead in a hundred years time. There are undoubtedly just in addition many optional languages which hold a large amount of potential and will be extremely hard to if not impossible to drastically eliminate. Also there are in addition many members of the public who have to be taught and in too little time. Even if a revelation is to takes, place then still it is nearly impossible to drastically eliminate all the other optional vernaculars. If you take a glance at the computer industry, a revolution did place but still not all of the people employ a computer in their house like most of Africa. If a revolution does happens to take place for English then still not all people will utilize English. English might be the way into the future however it is not the only way there are with out a doubt another two; three options open to take us into the future. Therefore, it is extremely logical for me to disagree with the original statement. My thoughts are craved in this paragraph and so are my reasons for disagreeing. I.H 1 ...read more.