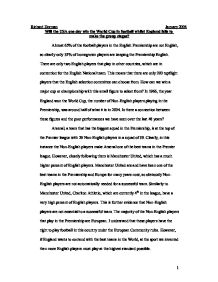 Will the USA one day win the World Cup in football whilst England fails to make the group stages?

Richard Dorman January 2004 Will the USA one day win the World Cup in football whilst England fails to make the group stages? Almost 65% of the football players in the English Premiership are not English, so clearly only 35% of homegrown players are keeping the Premiership English. There are only two English players that play in other countries, which are in contention for the English National team. This means that there are only 200 topflight players that the English selection committee can choose from. How can we win a major cup or championship with this small figure to select from? In 1966, the year England won the World Cup, the number of Non-English players playing in the Premiership, was around half of what it is in 2004. Is there a connection between these figures and the poor performances we have seen over the last 48 years? Arsenal, a team that has the biggest squad in the Premiership, is at the top of the Premier league with 26 Non-English players in a squad of 39. ...read more.

With fewer places available for our young English players to develop, the more the chance of a future Michael Owen or David Beckham being missed. I understand that these Non-English players are sometimes better than the English players but for the development of the National team they undoubtedly should be given the chance if we want, again, to win the World Cup. Even though soccer is not as popular in America, they are generally the best in the World at most sports partly because they have such a huge population to select their National team from. However, I think this also is because their system for all sports is extremely positive and has the country's best interests in mind. I predict that maybe within two World Cups, America's soccer team will come close to or even win the World Cup because of the exceptional system they have of producing good young players and than finding a place for them to play in the MLS (the American's equivalent to the Premier League). ...read more.

England are currently 8th in the World ranking and USA have already moved up to 10th place. This could be changed simply by enforcing a rule, similar to the one in the Major League in America, which would restrict the amount of Non-English players that could play for each team. Supposing that this was considered, the standard of the English National team would surely improve dramatically and would once again allow the team to be able to contend with the very best in the world. The problem will be persuading the Premiership Clubs that a successful National team is far more important than their own success. It might also be a difficult to restrict players on a Nationality basis due to European Legislation but an attempt must be made to protect the standard of the English football team. If nothing is done soon, regarding this matter, then the English fan base will soon see their beloved side drop down the world rankings and watch football take a backseat to lacklustre sports such as cricket and golf. 1 ...read more.