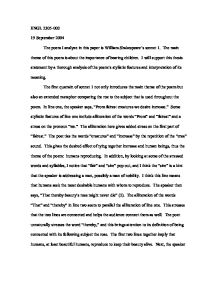 ENGL 2305-003 19 September 2004 The poem I analyze in this paper is William Shakespeare's sonnet 1. The main theme of this poem is about the importance of bearing children. I will support this thesis statement by a thorough analysis of the poem's stylistic features and interpretation of its meaning. The first quatrain of sonnet 1 not only introduces the main theme of the poem but also an extended metaphor comparing the roe to the subject that is used throughout the poem. In line one, the speaker says, "From fairest creatures we desire increase." Some stylistic features of line one include alliteration of the words "From" and "fairest" and a stress on the pronoun "we." The alliteration here gives added stress on the first part of "fairest." The poet ties the words "creatures" and "increase" by the repetition of the "crea" sound. This gives the desired effect of tying together increase and human beings, thus the theme of the poem: humans reproducing. In addition, by looking at some of the stressed words and syllables, I notice that "fair" and "sire" pop out, and I think the "sire" is a hint that the speaker is addressing a man, possibly a man of nobility. ...read more.

The quatrain, which forms a complete sentence, states that having children is the only way to preserve one's beauty and memory. Quatrain 2 discusses the subject's great self-centeredness. In line 5, the speaker says, "But thou contracted to thine own bright eyes." Alliteration of the words "thou" and "thine" draws focus to the fact that the poet is speaking directly to the subject, possibly a man. The statement "contracted to thine own bright eyes" shows the subject is withdrawn in his (or her) own beauty. Next, the speaker states, "Feed'st thy light's flame with self-substantial fuel" (6). The alliteration of the words "flame" "fuel" and in "self-substantial" again emphasizes the subject's self-absorbance. By pulling out the stressed words, I see that "thy," "self," "flame," and "fuel," stand out and are obviously connected so to emphasize that the subject him or herself is the enemy. In line 7, the speaker says, "Making a famine where abundance lies". Another disrupted stress brings in the possibility of the subject being a noble man. The natural stress of "Making" is broken so that "king" is the strong syllable. ...read more.

This metaphor continues in line 11 when the speaker says, "Within thine own bud buriest thy content." The rose now withers into its "own bud." The natural stress of "content" is interrupted placing stress on "tent," perhaps referring to the hiding or resting of the rose as it withers into itself. Finally, the speaker says, "And tender churl, mak'st waste in niggarding." Line 12 finishes the complete sentence and calls the subject a gentle peasant (p 156) and wasteful by not sharing his contents. The last two lines, the ending couplet, simply sum up the rest of the poem. The speaker calls the subject in line 13: "Pity the world or else the glutton be." The speaker tells the man to reproduce or be a glutton, one who indulges (in himself) excessively. The speaker finishes and says, "To eat the world's due, by the grace and thee" (14). The thought finishes by telling the subject he has used the world without giving back and will die. I think the word "due" may be a pun on the word dew, keeping with the metaphor of the rose. The rose eats the world's dew before withering into itself to die. ?? ?? ?? ?? ...read more.