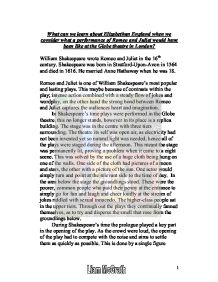 What can we learn about Elizabethan England when we consider what a performance of Romeo and Juliet would have been like at the Globe theatre in London? William Shakespeare wrote Romeo and Juliet in the 16th century. Shakespeare was born in Stratford-Upon-Avon in 1564 and died in 1616. He married Anne Hathaway when he was 18. Romeo and Juliet is one of William Shakespeare's most popular and lasting plays. This maybe because of contrasts within the play; intense action combined with a steady flow of jokes and wordplay, on the other hand the strong bond between Romeo and Juliet captures the audiences heart and imagination. In Shakespeare's time plays were performed in the Globe theatre, this no longer stands, however in its place is a replica building. The stage was in the centre with three tiers surrounding. The theatre its self was open air, as electricity had not been invented yet so natural light was needed, hence all of the plays were staged during the afternoon. This meant the stage was permanently lit, proving a problem when it came to a night scene. This was solved by the use of a huge cloth being hung on one of the walls. One side of the cloth had pictures of a moon and stars, the other with a picture of the sun. ...read more.

Not every Montague shared in the intense hatred for caplets. Romeo Montague was quite the opposite; he was infatuated with Rosaline, a Capulet. However Rosaline did not have an interest in Romeo. Juliet is introduced before she is seen on stage. This is done as men played all parts, so some background of the character is established before hand to prevent any confusion. As an effort to distract Romeo from his love to Rosaline, he is taken to a masque ball, hosted by the Capulet's. The purpose of the ball is to allow Juliet to meet 'Paris'. Paris was a prospective husband for Juliet, arranged by both their parents. Capulet was so excited by the news Juliet had agreed to marry Paris he moved the ball forward a day to hasten the proceedings. So it can be seen arranged marriages were present and indeed common in Elizabethan England. When Tybalt spots Romeo and his associates at the masque ball, he immediately informs lord caplet of their presents. As lord Capulet does not want to break the piece, Romeo and his party are allowed to leave, without confrontation. Although lord Capulet is unwilling to part with his daughter, this is because she is all he has left. ...read more.

By thinking in hurriedness, the Friar tried to mend one problem while creating another. Friar Lawrence plays a significant role in the plan for Juliet to "sleep." Friar Lawrence calms a frantic Juliet by giving her and telling her to "Take thou this vial, being then in bed, and this distilled liquor drink though off". Later, Juliet is uneasy and unsure of the effects of the potion. She hopes that this is only a temporary sleep and not a permanent one. He also tells Juliet that, "Shall Romeo by my letters know our drift, and hither shall hem come; and he and I shall watch thy waking, and that very night shall Romeo bear thee to Mantua". Unexpected to both the Friar nor Juliet that such an error would occur, proven to be deadly. Romeo was not able to receive the letter. Friar Lawrence plays an important rule in the actual deaths of Romeo, Juliet, and Paris. Friar Lawrence is unable to reach Romeo with the news of Juliet's "death." Romeo, thinking Juliet is dead rushes to Verona, but not before buying some fast poison. There he finds his true love in a deep sleep not yet kissed by death. When Juliet awakes, Friar tells her of the unfortunate deaths. Juliet, unable to handle the situation decides to kill herself. Taking Romeo's sword she stabs herself. Liam McGrath. 1 ...read more.