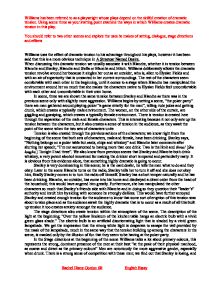 Williams has been referred to as a playwright whose plays depend on the skilful creation of dramatic tension. Using scene three as your starting point examine the ways in which Williams creates dramatic tension in A Streetcar Named Desire

Williams has been referred to as a playwright whose plays depend on the skilful creation of dramatic tension. Using scene three as your starting point examine the ways in which Williams creates dramatic tension in this play. You should refer to two other scenes and explore the uses he makes of setting, dialogue, stage directions and effects Williams uses the effect of dramatic tension to his advantage throughout his plays, however it has been said that this is a more obvious technique in A Streetcar Named Desire. When discussing this dramatic tension we usually associate it with Blanche, whether it is tension between Blanche and Stanley, Blanche and Stella or Blanche and Mitch. Williams deliberately allows the dramatic tension revolve around her because it singles her out as an outsider, who is, alien to Elysian Fields and with an air of superiority that is unwanted in her current surroundings. The rest of the characters seem comfortable with each other in the beginning, until it comes to a stage where Blanche has manipulated the environment around her so much that she makes the characters native to Elysian Fields feel uncomfortable with each other and uncomfortable in their own home. ...read more.

This gives the impression of people who don't necessarily enjoy each others company but feel forced together by their situation, because they work together and live near to one another. The dialogue informs us of many of the things that have previously created tension, a tension that still lingers between the two characters now. For example, Blanche's feeling of superiority is something that caused Stanley to dislike her, something she brings up when she insists that the men don't stand as she enters the room. Stanley is abusive to Mitch, Stanley take his frustration with Blanche's behaviour out on Mitch as he doesn't yet feel he is able to fully take it out on Blanche. This pent up emotion that cannot be released is all adding to the looming cloud of tension that absorbs the entire atmosphere of the scene. Besides the obvious kind of tension we see in scene three, the built up anger that everybody is masking behind fake grins to temporarily keep the peace, there is a lot of s****l tension among the characters. Blanche's undressing in front of the portieres, so that she can partly be seen to seduce and entice the men, is an outward expression of the s****l frustration she ...read more.

Blanche however was released from her tension in a much different manner. After the trauma of the r**e, Blanche has become unable to distinguish between fantasy and reality and she no longer cares about tension or complications with other people, only her fantasy world. Not everything has gone completely back to normal, there will be a lingering tension between Mitch and Blanche; we know this from one of Mitch's Final comments in the play (to Stanley) " You! You done this, all o' your g*****n interfering with things you" Tennessee Williams shows a great display of skilful creation of dramatic tension, through many details and aspects of the play. He uses it in clever places too to create suspension and mould the viewers mind to decide how we perceive the characters, In particular Blanche and Stanley. It is through this creative use of tension that Williams manages to save Blanche's character and in some ways Stanley's character from complete condemnation from the audience, he uses this feeling of tension and irritation to create pity for the character, which I think is needed for the play to stop it from becoming a tale of complete tragedy. Rachel Diane Gordon 6B English Essay ...read more.