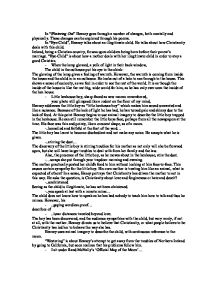 In "Wintering Out" Heaney goes through a number of changes, both mentally and physically. These changes can be explored through his poems. In "Bye-Child", Heaney talks about an illegitimate child. He talks about how Christianity deals with this child. Ireland, being a Christian country, frowns upon children being born before their parent's marriage. "Bye-Child" is about how a mother deals with her illegitimate child in order to stay a good Christian. - When the lamp glowed, a yolk of light in their back window, The child in the outhouse put his eye to the c***k- The glowing of the lamp gives a feeling of warmth. However, the warmth is coming from inside the house and the child is in an outhouse. He looks out of a hole to see through to the house. This shows a sense of curiosity, as we feel in order to see the rest of the world. It is as though the inside of the house is like the rest big, wide world for him, as he has only ever seen the inside of the hen house. - Little henhouse boy, sharp-faced as new moons remembered, your photo still glimpsed like a rodent on the floor of my mind, Heaney addresses the little boy as "little henhouse boy" which makes him sound unwanted and like a nuisance. ...read more.

The theatre is very similar to his wife. It is unpredictable and new. Through the summer, Heaney winded down and enjoyed himself, trying to forget Ireland problems, but they have followed him to America. There is no getting away from them. - We drove by, a dwindling interruption, as clappers smacked on a bare altar... We realize that he left Ireland on Good Friday, and as he drove by, people were in church. There was a silence in respect of Good Friday, and his car made a slight noise as he drove by. Clappers were used instead of bells, to dumb down the noise. - ..And congregations bent to the studded crucifix. As the crucifix is being kissed, Heaney feels free, as though the burden has been lifted. - Roads unreeled, unreeled falling light as casts laid down on shining waters. He repeats 'unreeled' to emphasise on the length of the road. As he drives away from his troubles, he feels light and free, as though casting a net on the water. He contrasts fishing to unreeled casts. Also, he compares it with religion, as Jesus's decipals were fishermen. - Under the moon's stigmata six thousand miles away, I Imagine untroubled dust, a loosening gravity, Christ weighing by his hand. He replaces Christ with the moon, applying a stigmata to it. ...read more.

He talks about how the Tollund Man was executed. We find out that he was a sacrifice to the Mother Ground. - Bridegroom to the goddess, she tightened her torc on him And opened her fen He uses s****l imagery to create a clearer picture to the reader. He was a sacrifice to the ground. This ensured fertility. - Those dark juices working Him to a saint's kept body... Here he talks about the Tannic Acid which preserved his body. - I could risk blasphemy.... Heaney substitutes the Tollund Man for the patron saint of Northern Ireland. In a sense he is tired of Christianity and can no longer deal with the problems that come with it, and is thus looking towards other religions. In conclusion, Heaney uses the moon as a new found symbol and replaces Mother Ireland with it. Because of all the conflict in Northern Ireland over religion, Heaney is trying to get away from Christianity. Also, Christianity, is forcing others to make very horrific decisions, which Heaney, himself does not want to go through. Christianity has developed a lot over the past hundred years or so, but the fact that people are interpretating it in their own versions is what has driven Heaney away from Christianity. The language he uses is mostly referred to the moon, and Christ's wounds are mentioned a great deal. He compares the two, showing that his new found symbol is more dominant and pushes Christianity to one side. ...read more.