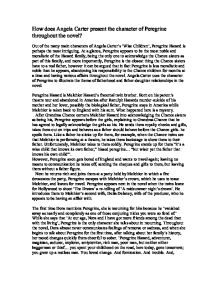 How does Angela Carter present the character of Peregrine throughout the novel? Out of the many main characters of Angela Carter's 'Wise Children', Peregrine Hazard is perhaps the most intriguing. At a glance, Peregrine appears to be the most noble and moralistic of the Hazard family, being the only one to acknowledge the Chance sisters as part of this family, and more importantly, Peregrine is the closest thing the Chance sisters have to a real father, however it can be argued that in fact Peregrine is less moralistic and noble than he appears, abandoning his responsibility to the Chance children for months at a time and having various affairs throughout the novel. Angela Carter uses the character of Peregrine to illustrate the theme of fatherhood and father-daughter relationships in the novel. Peregrine Hazard is Melchior Hazard's fraternal twin brother. Born on his parent's theatre tour and abandoned in America after Ranulph Hazards murder-suicide of his mother and her lover, possibly the biological father, Peregrine stays in America while Melchior is taken back to England with his aunt. What happened here is a mystery. After Grandma Chance corners Melchior Hazard into acknowledging the Chance sisters as being his, Peregrine appears before the girls, explaining to Grandma Chance that he has agreed to legally acknowledge the girls as his. He sends them royalty checks and gifts, takes them out on trips and behaves as a father should behave before the Chance girls- he spoils them. ...read more.

Here Dora lists his bad points 'And fornication. And trouble.', but she describes them in a sober way, because even if they are bad points, they were what Peregrine Hazard was and she is preserving his personality, not changing it to seem better, as someone who loved a person for who they were would. Another interesting comment is 'funnily enough, towards the end, you loved butterflies'. When Dora describes Peregrine, she uses many euphemisms, while she isn't lying about what Peregrine does or about his character, she can cast him in a better light with euphemisms. I think butterfly might be a euphemism or metaphor for moving around and being hard to pin down, as a butterfly is. Some cultures consider butterflies as bad omen, it could be that Dora is using butterflies to explain that Peregrine loved danger, and perhaps she feels he should have seen this coming. Peregrine's personality can be described as very promiscuous, outgoing, and flirtatious. He is adventurous gets bored easily, not serious, and lives for the moment, whereas Melchior wants to live forever. It is obvious that Dora is annoyed by his adventurousness and his frequent coming and goings in the novel 'pilgrim by name, pilgrim by nature... we'd get a hamper full of rotten fruit...he never knew what would travel and what wouldn't' I think that 'he never knew what would travel and what wouldn't' could be a double meaning, I think this is Dora ...read more.

"but wiser yet the father that knows his own child"'. Dora uses the idea of a harbour, which has connotations of safety and home, to describe Peregrine. It is also interesting to note that while Dora defiantly loves him in a fatherly way, she does appear to be attracted romantically to Peregrine, for example she describes him in a romantic way 'Ooh, wasn't he a handsome young man, in those days.... There was always this quality about Peregrine, especially when he was glorious in his twenties, broad of shoulder, heavy of thigh, with his unruly thatch of burnished, copper hair, the lavish spattering of freckles across his nose, laughing green eyes flecked with gold.' Dora uses more than facial description here, commenting on his figure, which is typical of a romantic description. Dora also un-ashamedly describes Peregrine doing wrong (going to a brothel) as something only just worth commenting about, and with humour. 'What could he be doing in Eaton square, on the spur of the moment, the naughty boy? ... He was straightening his tie and dusting off his jacket... flashed us with a big, cheeky grin.' If Dora considered Peregrine as only a father figure, I think she would be less casual about this memory of Peregrine. She uses a lot of detail here, as though she can remember perfectly, even though she was only about twelve. I think this is a good indication of any kind of love, because of the attention to detail she has about her loved ones. ...read more.