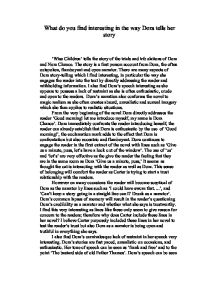 What do you find interesting in the way Dora tells her story 'Wise Children' tells the story of the trials and tribulations of Dora and Nora Chance. The story is a first person account from Dora, the often outspoken, flamboyant and open narrator. There are many aspects of Dora story-telling which I find interesting, in particular the way she engages the reader into the text by directly addressing the reader and withholding information. I also find Dora's speech interesting as she appears to possess a lack of restraint as she is often enthusiastic, crude and open to the readers. Dora's narration also conforms the novel to magic realism as she often creates absurd, unrealistic and surreal imagery which she than applies to realistic situations. From the very beginning of the novel Dora directly addresses the reader 'Good morning! ...read more.

However on many occasions the reader will become sceptical of Dora as the narrator by lines such as 'I could have sworn that....', and 'Can't keep a story going in a straight line can I? Drunk as a narrator'. Dora's common lapses of memory will result in the reader's questioning Dora's credibility as a narrator and whether what she says is trustworthy. I find this very interesting as lines like these only seem to give reason for concern to the readers; therefore why does Carter include these lines in her novel? I believe Carter purposely included these lines in her novel to test the reader's trust but also Dora as a narrator is being open and truthful in everything she says. I also find Dora's carnivalesque lack of restraint in her speech very interesting. ...read more.

This is evident through Perry who appears to grow larger and wider when he is angry at Melchior outside the burning house. 'He seemed to grow, taller, wider, bigger. Huge.' As Peregrine's anger grows he as a person grows according to Dora. The reader will again have to suspend belief and will therefore question Dora's accuracy. Due to the large quantity of magic elements in the novel the reader can continue to question all the absurd imagery and coincidences or the readers can accept Dora's memory which in turn allows the novel to freely flow. I found 'Wise Children' very interesting especially Dora's story-telling, as Dora is the narrator it is her memory that gives us insight and knowledge of the text. I find Carter's free and open writing style very interesting and trustworthy. She often engages the reader by directly addressing them, withholding information, and along with the text possessing magical elements creates an engaging and fascinating story. ...read more.