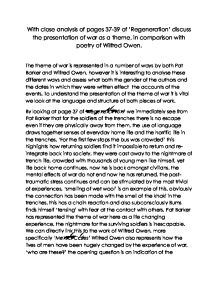 With close analysis of pages 37-39 of Regeneration discuss the presentation of war as a theme, in comparison with poetry of Wilfred Owen.

With close analysis of pages 37-39 of 'Regeneration' discuss the presentation of war as a theme, in comparison with poetry of Wilfred Owen. The theme of war is represented in a number of ways by both Pat Barker and Wilfred Owen, however it is interesting to analyse these different ways and assess what both the gender of the authors and the dates in which they were written effect the accounts of the events. To understand the presentation of the theme of war it is vital we look at the language and structure of both pieces of work. By looking at page 37 of 'Regeneration' we immediately see from Pat Barker that for the soldiers of the trenches there is no escape even if they are physically away from them, the use of language draws together senses of everyday home life and the horrific life in the trenches, 'For the first few stops the bus was crowded' this highlights how returning soldiers find it impossible to return and re-integrate back into society, they were cast away to the nightmare of trench life, crowded with thousands of young men like himself, yet life back home continues, now he is back amongst civilians, the mental effects ...read more.

However also a degree of responsibility it put onto the civilians by Barker, here there is an attack on the effect the civilians had on war heroes, there was no acceptance for trauma caused by the war, 'shell-shock' was seen as a sign of cowardice, because of this, in this example Burns feels the need to prevent this understandable outburst for fear of being cast as an outsider. It could also be said that Barker touches upon the theme of masculinity, it is a stereotype of a male to be expected not to cry or show too much emotion to a horrific experience, it is in the nature of man to be able to protect. This once more ties in nicely with the work of Owen in 'Mental Cases' as a similar theme is touched upon. The very title is a direct representation of the attitude towards post-traumatic stress, the returning soldiers who showed any signs of it where simply 'mental' and could not be helped so they were once more cast out of the society they fought to protect. Another example of this comes with the use of the word 'hilarious' completely inappropriate to the theme of the poem it represents the mockery ...read more.

the animals on the tree but also the carelessness of the war its self, the violence is completely random, those who kill each other knew nothing of the individual they shot, they had been labelled the enemy and Barker attacks this concept. Burns mental state again represents the struggle the soldiers had as he is described to 'look around at the circle of his companions' the fact in reality the companions are animals has again a few possible interpretations, the use of animal imagery shows how merciless the killings are, they are practically slaughtered like animals, sent slowly walking to inevitable death. There also is a sense of loneliness coming through as a result of survivor guilt, Burns recognises his men to be dead however he is the only one alive, sat on his own, the final line is firm evidence of this 'this was where he had wanted to be' with these men he was accepted, he was one of them and with acceptance comes comfort. This togetherness can also be seen in my opinion in 'Mental Cases' throughout we see the use of the collective term 'these' this shows they are seen as a group, yet with the deaths they become alone. ...read more.