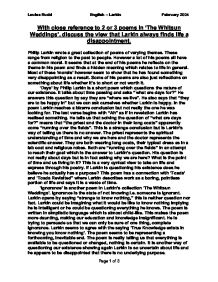 With close reference to 2 or 3 poems in 'The Whitsun Weddings', discuss the view that Larkin always finds life a disappointment.

With close reference to 2 or 3 poems in 'The Whitsun Weddings', discuss the view that Larkin always finds life a disappointment. Philip Larkin wrote a great collection of poems of varying themes. These range from religion to the past to people. However a lot of his poems all have a common moral. It seems that at the end of his poems he reflects on the theme in his poem and finds a hidden meaning which relates to life in general. Most of these 'morals' however seem to show that he has found something very disappointing as a result. Some of his poems are also just reflections on something about life whether it's to short or not worth it. 'Days' by Philip Larkin is a short poem which questions the nature of our existence. It talks about time passing and asks "what are days for?" He answers this question by say they are "where we live". He also says that "they are to be happy in" but we can ask ourselves whether Larkin is happy. In the poem Larkin reaches a bizarre conclusion but not really the one he was looking for. The last verse begins with "Ah" as if in revelation Larkin has realised something. ...read more.

It is another way of questioning our existence showing again Larkin is so uncertain about life and he appears to be disappointed that there is no underlying purpose. 'Faith Healing' is another of Larkin's poems in which he makes a disappointing conclusion on life. The poem is told by a persona watching a faith healing group. A faith healer is someone who has a connection with God and by seeing them you are able to make that connection to and be 'faith healed'. The most famous faith healer would be Jesus who many people see as genuine however the persona in this poem is very cynical and believes this 'performance' going on in front of him is a big scam. The persona describes "the women" filing "to where he stands". This shows that only women feel the need to be faith healed here ands it implies the gullibility of women because the persona is showing that men would not usually attend because they know it's fake. The man at the front, the 'faith healer' is dressed as a vicar; "rimless glasses, silver hair, dark suit, white collar" This is to show his religious connection with God. ...read more.

In 'This be the Verse' Larkin blames all the things that go wrong in life on his or our parents. This is because we were brought up by them and they influenced us so much so that our life goes a certain way as a result of them. He concluded that life's faults are there because your parents 'fucked' you up. Larkin also seemed to discuss fate occasionally and he believed everything must happen for a reason, so the reason his life would have been a disappointment would have been as a result of something he did, or in this case his parents did. 'Mr Bleany' and 'Ambulances' also question the nature of existence and conclude uncertainty. Most of the poems in the collection 'The Whitsun Weddings' all seem to conclude in the same certainty; that life is disappointing and never what you expect it to be. This seemed to be Larkin's view on his life and he expressed this through his poetry which although sometimes is saddening is very thoughtful and effective in that it makes you consider his point of view, no matter how pessimistic it may seem. Louise Rudd English - Larkin February 2004 Page 1 of 3 ...read more.