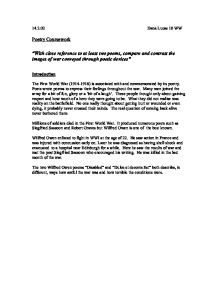 14.2.02 Dana Lucas 10 WW Poetry Coursework "With close reference to at least two poems, compare and contrast the images of war conveyed through poetic devices" Introduction The First World War (1914-1918) is associated with and commemorated by its poetry. Poets wrote poems to express their feelings throughout the war. Many men joined the army for a bit of fun, glory or a 'bit of a laugh'. These people thought only about gaining respect and how much of a hero they were going to be. What they did not realise was reality on the battlefield. No one really thought about getting hurt or wounded or even dying, it probably never crossed their minds. The real question of coming back alive never bothered them Millions of soldiers died in the First World War. It produced numerous poets such as Siegfried Sassoon and Robert Graves but Wilfred Owen is one of the best known. Wilfred Owen enlisted to fight in WWI at the age of 22. He saw action in France and was injured with concussion early on. Later he was diagnosed as having shell shock and evacuated to a hospital near Edinburgh for a while. Here he saw the results of war and met the poet Siegfried Sassoon who encouraged his writing. ...read more.

There is irony in the fact that before the war he was even proud to have a football injury in " a blood-smear down his leg". The poem ends with the disabled soldier realising that he is going to be in an institution for years dependent on others for everything, even to be put to bed, "Why don't they come" is written twice to emphasize his helplessness. Conclusion Wilfred Owen clearly draws on his terrible experiences at the front and in a hospital to write these poems. The images war in the trenches and a disabled soldier in an institution are powerful and graphic. In "Dulce et Decorum Est" Owen deals with a group of soldiers in contrast to the situation of on soldier in "Disabled". Both poems empasize the fact that the vast majority soldiers had no idea what was in store for them and went innocently to war. They are anti-war poems and had people had poems like these before the war I think there might have been many more pacifists. "Disabled" is the more moving poem in my opinion as it deals with one man's struggle to come to terms with what has happened to him and the fact that he feels less than useless hardly a human being. ...read more.

It would show them the truth. However if I was asked about what a poem that describes a poem where a person can see how the war effected people I would recommend disabled. Disabled is in my opinion the most moving of the stories as it represents a man's struggle for his life. This man can offer nothing to his country now. He can't even offer himself something that he feels he will make his staying alive worth it. While the people in Dulce et decorum est are still alive this mans soul has in effect died. He has lost his colour and can't get used to the fact if being unpopular. I find Dulce et decorum est to be the most powerful of the two poems. My reasons are as follows, although disabled is a very good, very powerful poem in its own right it only describes the views of one person in the army. I think that what makes Dulce et decorum est so powerful is that Owen speaks for everyone in the army when he talks of the horrific sights and attempts by the Germans to gas them. Reading these poems can change a person. Many people say they live stressful lives and they are under extreme pressure. If you think of what these young men have been through it can put a lot of things in prospective ...read more.