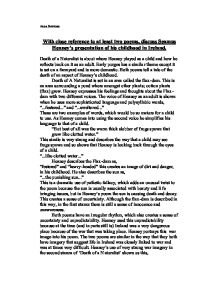 With close reference to at least two poems, discuss Seamus Heaney's presentation of his childhood in Ireland.

Anna Bowman With close reference to at least two poems, discuss Seamus Heaney's presentation of his childhood in Ireland. Death of a Naturalist is about where Heaney played as a child and how he reflects back on it as an adult. Early purges has a similar theme except it is set on a farmyard and is more domestic. Both poems tell a tale of the death of an aspect of Heaney's childhood. Death of A Naturalist is set in an area called the flax-d*m. This is an area surrounding a pond where amongst other plants; cotton plants (flax) grew. Heaney expresses his feelings and thoughts about the Flax-d*m with two different voices. The voice of Heaney as an adult is shown when he uses more sophisticated language and polysyllabic words, "...festered..." and "...sweltered..." These are two examples of words, which would be so mature for a child to use. As Heaney comes into using the second voice he simplifies his language to that of a child. "But best of all was the warm thick slobber of frogs spawn that grew like clotted water." This simile is very strong and describes the way that a child may see frogs spawn and so shows that Heaney is looking back through the eyes of a child. ...read more.

'The Early Purges' is a poem, which describes a time in Heaney's childhood when he learnt the ways of people living in rural Ireland. The opening line of 'The Early Purges' is very bold and it is quite shocking that a six year old child saw kittens drown. "I was six when I first saw kittens drown." Heaney wants to shock the reader and continuously does it throughout the poem. What is more disturbing and shocking is the fact that it is no accident that the kittens are drowning. This is an example of emotion and even tear jerking images. "Dan Taggart pitched them, 'the wee scraggy s***s'," This line may also come as surprise to the reader because kittens are usually described to be sweet and beautiful. This direct speech creates a sense of immediacy, which makes the poem seem more realistic. An echo of Direct speech is used in 'Death of a Naturalist' which also gives a sense of immediacy and makes the reader feel although they are actually on the scene of the poem. "...the daddy frog was called a bullfrog and how he croaked and how the mammy frog laid hundreds of little eggs and this was frogspawn." Heaney brings aspects of domestic Ireland into his poems to show that these poems are personal to him and his own childhood life. ...read more.

Reassurance of what is Heaney is feeling in his childhood is soon brought back into the poem when, in the second sentence of this stanza when Heaney describes other cruel actions Dan Taggart performed against animals. This sentence is quite long so the tension from the sentence before is relieved, but it is still very dramatic because of Heaney's use of many commas and strong verbs. "...But the fear came back when Dan trapped big rats, snared rabbits, shot crows or with s sickening tug, pulled old hens' necks..." Heaney is then describing himself in the sixth stanza to be, "Still, living displaces false sentiments..." This means that after all he has witnessed he is still living so everything he first thought of so be wrong and cruel must have been just false sentiments because he was perfectly fine and overcome his bad experiences. This is shown in the last two lines of the sixth stanza and the whole of the seventh, "...And now when shrill pups are prodded to drown, I just shrug, 'b****y pups'. It makes sense: 'Prevention of cruelty' talk cuts ice in the town where they consider death unnatural, but on well run-farms pest have to be kept down" This is considered a fact in rural Ireland. The last stanza is quite patronising to urban people because it is obvious that death is a natural occurrence. ...read more.